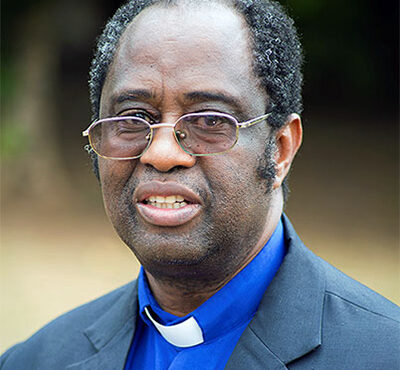 As a child, he was attracted to church activities with the hope of joining the ministry one day.

And bound with the string of faith, the call became stronger and he was eventually ordained a Pastor in the Evangelical Presbyterian (EP) Church in August, 1980.

As a result of his commitment to Christianity, this man of God has dedicated 40 years of his life to the work of God and has contributed positively towards the growth of the church and other denominations both locally and internationally.

Rev. Dr Setri Nyomi, a Ghanaian, is the first African and first non-European to have assumed the position of General Secretary at the World Alliance of Reformed Churches — the umbrella body of all Presbyterian and reformed churches in the world.

Rev. Dr. Nyomi hails from Anloga in the Volta Region. He had his General Certificate of Education (GCE) Ordinary Level (O’ Level) at Prempeh College, Kumasi, and GCE Advanced Level (A level) at Mawuli School, Ho, where he studied General Arts.

His theological studies began at the University of Ghana, Legon, where he graduated with BA (Hons) in 1978, and Trinity Theological Seminary, Legon, which he completed in 1980.

He received a Master of Sacred Theology Degree from Yale University Divinity School in 1981 and a Doctor of Philosophy (Ph.D) in Pastoral Theology from Princeton Theological Seminary, Princeton, New Jersey in 1991, all in the United States of America (USA).

The Theologian speaking to The Spectator about his life and career said he did not begin his divine journey with the aim to serve abroad but as the saying goes that “God works in mysterious ways”, it turned out that his work in Ghana was noticed and appreciated elsewhere.

He noted that his call to the ministry was “strengthened” when he went to Vicksburg, USA, in the 70s for the first time as an exchange student to attend high school.

This debased tradition he encountered abroad set off his ministerial journey to make a difference and also be “a force for justice.”

Between 1994 and 1999, Rev. Dr Nyomi was a Senior Executive of the All African Conference of Churches (AACC) which brought most of the protestant denominations in Africa together.

From April 2000 to August 2014, he became the General Secretary of the World Alliance of Reformed Churches (WARC). The organisation has a membership of about 80 million Christians in 108 countries.

In 2010 and under his tenure, WARC was changed to World Communion of Reformed Churches (WCRC). The mandate of the organisation, he explained, was to unite the churches and speak on their behalf as well.

As the spokesman of the WCRC, Rev. Dr. Nyomi had led delegations to dialogue and help resolve conflict in countries such as Liberia, Lebanon, Pakistan, Syria, DR Congo, Iraq, among other conflict-prone nations and returned to Ghana in 2014 after 14 years of dedicated service.

Currently, he is the District Pastor of the Adenta EP Church in Accra, a Senior Lecturer at the Trinity Theological Seminary and the Council Chair of the Evangelical Presbyterian University College, at Ho.

Prior to his mission abroad, he served at the Dzelokope EP Church in the Volta Region, and the Abeka EP Church also in the Greater Accra Region, among others.

The Reverend Minister intimated that the church was not a profit-making venture and that many people “ran away from ministry because they think of remuneration.”

He emphasised that the church was a “sacrificial place” and that in spite of the leadership and financial challenges, “God has always provided” for him and his family.

Highlighting other challenges, Rev. Dr Nyomi cited instances where people “decided to be hostile” and attempted to soil his hard-earned reputation because they thought he was interested in some other leadership positions.

“At the World Communion of Reformed Churches, a few elements had wondered why an African should be their leader.

“They tried to play their tricks, and I could see their tricks through my divine spectacles, and it was always defeated by God,” he said sarcastically.

Apart from proclaiming the gospel, Rev. Dr Nyomi maintained that the church must speak against social injustice stressing that “if there is oppression” in any part of the world the church should not be silent: “it must speak up.”

While praising churches that reach out to the poor and needy, he said that the church must as well tackle the fundamental issues on why people were poor in the first place.

“If people are suffering because the economy is bad, we need to be advocates in addressing the government at all levels about what its policies are doing to the people,” he noted and again advised church leaders to desist from centering their preachings on prosperity because “that is not what the gospel should stand for.”

Rev. Dr. Nyomi has influenced a good number of theology students through his work. He has done stints of visiting professorship in institutions in Germany and USA and continues to make adequate use of his expertise in other capacities as well.

He would launch his book titled “By God’s Grace – Memoires of Setri Nyomi” at the Trinity Theological Seminary in Accra on Monday, August 17, 2020 to mark his 40th anniversary in the ministry.

At age 66, he loves playing indoor games, singing and enjoying choral music. He is married to Madam Akpene Esther, a Chemist by profession. They have three children.