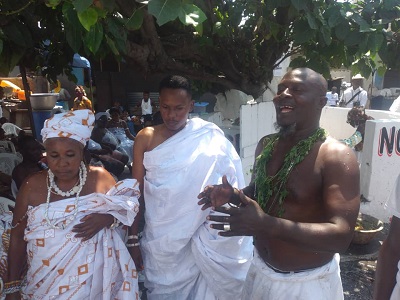 Nii Ashitey Tetteh, Head of the Okpe and Okortsoshishie families of Amamoley and James Town has observed that numerous chieftaincy disputes in the Ga State was driving investors and tourists away.

He said if these were not checked, violence, drug addiction and unemployment would continue to be the bane of the country.

Nii Ashitey Tetteh made the observation when he addressed members of the Okortsoshishie families at James Town, in Accra, after performing family rituals to usher in Homowo last Sunday.

Family members in the diaspora and countries like Togo, Anexor, Benin, and Nigeria graced the occasion.

He said chieftaincy disputes, which were fewer in the olden days, were originally not the custom of the Ga State, and that those formenting such trouble, now were doing so for their personal gains.

Nii Ashitey Tetteh, therefore, called on the government to stamp its authority on these trouble makers by bringing them to expeditious trial, to serve as a deterrent to others, and promote peace for investment to thrive in the Ga State.

He said Homowo celebrations had for many centuries served as a source of unity, cultural practices, and Remembrance Day for the ancestors.

He said cultural practices likened to the celebrations of Twins Festival and the sprinkling of Kpokpoi should never be misconstrued for fetish and other bad practices.