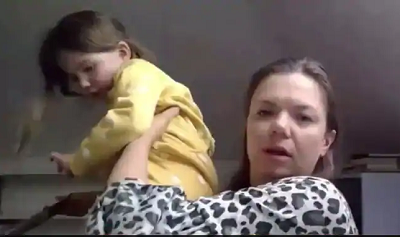 A live interview on BBC News between Dr Clare Wenham and anchor Christian Fraser was hilariously derailed when Dr Wenham’s daughter interrupted their discussion. In a moment sure to resonate with parents across the world who are working from home, little Scarlett interrupted her mother, demanding to know who she was speaking to.

According to the Independent, Dr Clare Wenham, a global health policy expert from the London School of Economics, had been speaking to BBC anchor Christian Fraser about coronavirus lockdowns when her young daughter appeared in the background.

Scarlett was first seen trying to decide where to place a unicorn painting as her mother carried on the discussion, prompting Mr Fraser to ask her name.

“Scarlett,” he said, after getting to know her name. “I think it looks better on the lower shelf, and it’s a lovely unicorn.”

The child refused to let the discussion go on, throwing herself into the limelight, and hilariously asking, “What’s his name? What’s his name, Mummy?” before addressing Christian with: “Christian I’m just deciding where mummy wants it to go. Mummy, where do you want it to go?”