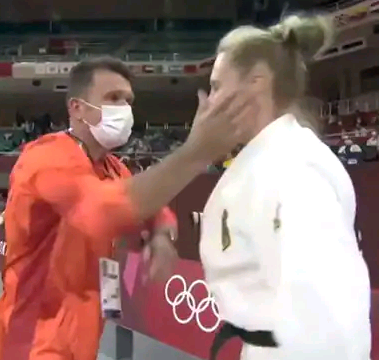 Olympics viewers were left shocked after a German judo star was slapped in the face by her coach before a judo match.

Footage that had gone massively viral on social media showed the German athlete being shaken and slapped by her coach before entering the ring.

The 32-year-old judo star, however, had defended the slap as a ‘pre-fight ritual’.

“Don’t worry guys! That’s the ritual which I chose before fights. My coach is just doing what I want him to do to fire me up!” the judo star Martyna Trajdos wrote on her Instagram after the video went viral.

“I need this before my fights to be awake,” she said.

In the short clip, the German athlete turned around before entering the ring to face her coach, who dropped his bag to shake her violently and slap her twice.

According to news reports, the incident unfolded prior to her elimination in a round of 32 fight against at the Tokyo Olympics.