Cobra pounces on man as he tries to lift it 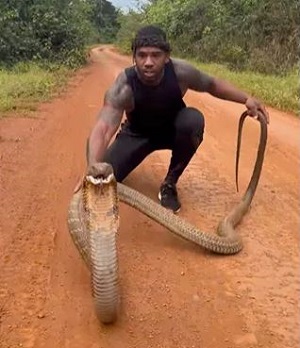 • He played with the python as people feared for his life

A man had a near-miss after a huge King Cobra pounced on him while he was trying to catch it with his bare hands.

In a chilling video of the incident which had now gone viral online, a man named Mike Holston was seen holding the tail of a large King Cobra as he tried to control it.

He attempted to lift the snake off the ground while the serpent looked alert with its hood spread wide but as soon as he lifted it, the snake turned towards him and tried to attack.

He, however, escaped the attack narrowly, which could have ended very bad.

The clip had attracted more than 5.6 million views on the social media platform with many people expressing their concern for the man for handling such a ferocious snake with his bare hands.

Adding some more details about the snake, Mike Holston, said that the snake was a 12-foot cobra which he found in a village.

“It was full of ticks and had a spicy attitude. There is nothing like working with animals in their natural habitat,” he wrote.

While some people expressed concern for the man, others vowed to never mess up with a snake like that.  — ndtv.com