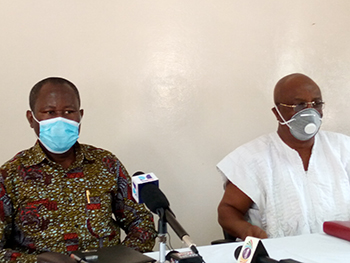 The Ghana Cocoa Board (COCOBOD) will commit more than a third of the USD 600,000 loan it has secured from the African Development Bank (AfDB) to address the problem of swollen shoot diseases and over-aged cocoa trees in the country, the Chief Executive Officer (CEO) of COCOBOD, Mr Joseph Boahen-Aidoo has said.

“We will also do an assessment of the problem and see how it had impacted the lives of cocoa farmers and their families and seek solutions to the problems,” he emphasised.

Mr Boahen-Aidoo disclosed this to the media when he paid a courtesy call on the Volta Regional Minister, Dr Archibald Yao Letsa at his office on Tuesday as part of his three-day duty tour of the Volta and Oti regions.

The visit was to enable him and his entourage inspect cocoa farms as well as assess various crop initiatives, and the degree of damage caused by the swollen shoot disease on their farms.

Mr Boahen-Aidoo said so far, 300,000 hectares of the cocoa lands had been affected by the swollen shoot disease in the country, adding that the Volta and Oti regions were not left out.

Meanwhile, he said 3.6 million cocoa seedlings had been raised for distribution to farmers and that a total of 3,000 hectares of cocoa farms affected by swollen shoot were to be rehabilitated.

“This will begin to yield results between six and seven years”, the COCOBO CEO added.

In the meantime, he said, hand pollination and pruning were among measure adopted to protect the cocoa farms.

Mr Boahen- Aidoo commended the security agencies in the Volta Region for their ferocious fight against cocoa smuggling, saying “The recent seizure of a total of 625 bags of cocoa from smugglers in the Wudome, Ave, Papase and Kadjebi areas testified to their strong stance to protect the cocoa industry from nation wreckers.”

On his part, Dr Letsa said that cocoa was a national treasure and for that matter, the Regional Security Council would always protect the interest of the farmers and deal ruthlessly with the smugglers.