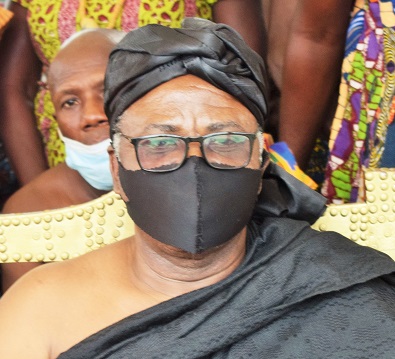 The Osie of Avatime, Osie Adza Tekpor VII, has described the meeting between national security heads and the Volta Regional House of Chiefs in Ho over the Western Togoland secessionist issue and related matters a fortnight ago, as fruitful with bright prospects for addressing the problem effectively.

He said in an interview in Ho that it was gratifying that the government’s security heads have finally acknowledged the need to engage the traditional rulers in the quest for solutions in such sensitive matters, as it emerged from the meeting which was held behind closed doors.

Osie Adza Tekpor highlighted the need for all stakeholders, including the various political parties, to get involved in the process to quell the secessionist threats which were causing fears and anxieties among the people of the Volta Region in particular, and the country as a whole.

Meanwhile, he called for a speedy investigation in the recent attack on the Intercity STC yard in Ho by gunmen carrying flags and other insignia said to belong to the so-called ‘Western Togoland’ group, and make them face the full rigours of the law.

Osie Adza Tekpor, who is President of the Congress of the Paramount Chiefs and Queens of the Ho West District, expressed concern over the true identities of the attackers and said it was mind-boggling that none of them spoke Ewe to their victims.

“It is, indeed, worrying to realise that the people who claim to be fighting for the secession of the land of the Ewe people do not speak Ewe,” said the Osie.

He maintained that the attack had left the people of the Volta Region with more questions than answers, especially with regards to the identities of the aggressors, and that made a speedy investigation into the matter absolutely imperative.

Osie Adza Tekpor said that it was also essential to establish the identities of those killed during the terrorist acts in the Battor and the Juapong areas, “so that we can commiserate with the families of the deceased”.

He said that what the country needed most before, during and after the elections, was peace.

The Osie of Avatime revealed that the chiefs earlier drew the government’s attention to the early “warning signs and undercurrents” to the activities of the separatists “but these were swept under carpet”.

He pointed out that certain unguarded and discriminatory utterances against Ewes, by the some political figures in recent time was not helping the peace.

For that matter, Osie Adza Tekpor insisted that, the government must promptly and ruthlessly deal with those who made such divisive statements which could only foment trouble in the country.