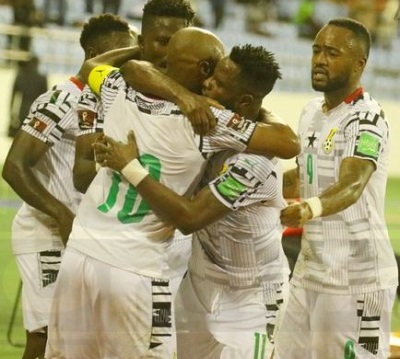 Andre Morgan Dede Ayew needs no introduction. He is a house-hold name in Ghana and world football. Such an enchantingly alluring character!
Popularly known as Dede, the Ghana attacking midfielder and Black Stars captain marked his 100th appearance for the senior national team at the Cape Coast Sports Stadium.
And, what a magnificent fashion to cap it in the Central Region – scoring a crucial spot-kick for Ghana against South Africa that catapulted the Stars to the final phase (play-off) of the Qatar 2022 World Cup tournament.
Leicester City defender Daniel Amartey had been ‘soiled’ in the area by defender Rushine de Reuck. The visitors protested the offence, but Referee Maguette Ndiaye, stuck to his gun.
It was a big moment for Ghana who only needed a goal to sail through. Who was going to effect the crucial kick? But before anyone could stretch it further, Dede stepped up to that onerous responsibility and sent the goalie the wrong way, firing the Cape Coast Stadium into raptures. It happened to be the only goal of the night.
Three days earlier, the Qatar-based Ghana captain had sublimely curled home a free-kick against Ethiopia in a 1-1 stalemate played at the FNB Stadium in South Africa. The Ethiopians say they had chosen that venue of all places, following a state of insecurity in their country.
From the records, Dede is the second most-capped player for Ghana – only nine caps short of legend Asamoah Gyan.
In appreciation of the centennial feat, the Ghana Football Association (GFA) and the Ministry of Youth and Sports celebrated Dede for reaching his latest milestone, honouring him with a special customised Ghana jersey with his name and the number 100 emblazoned on it. It was an enthralling splendor!
“It’s been an honour of a lifetime to play for my country and a blessing to be able to get 100 caps. Thanks to all players and coaches who have helped me all the way. Thanks also to the GFA and the Minister of Sports. God bless our homeland Ghana and make us Great and Strong,” Dede posted on social media.
Highest goal-poacher in the history of the Africa Cup of Nations (AFCON) with nine goals, the now 31-year-old Dede carved his Ghana debut in 2007, and has presently bundled home 22 goals for the Black Stars.
The former Swansea City and West Ham star is well loved by Ghanaians, having captained the national Under-20 team (Black Satellites) to gold at the World Youth Tournament in Egypt, 2009.
That bravura of a feat, is still Africa’s solitary gold at that level.
Dede’s unparalleled sense of commitment, dedication, discipline and valour on the pitch has won him numerous fans across the world.
He once said: “It is a huge honour to play for your country, and once you get the opportunity, you have go all out, kill yourself and bring smiles on the faces of the fans.”
Presently, Dede is faced with the mammoth task of leading the nation to the Qatar World Cup. It is a Herculean challenge, but it is surmountable with a single, unwavering sense of purpose and hardwork.
The play-offs among 10 countries to determine the five teams to represent Africa in Qatar is scheduled for March, 2022.
From the teams that have made it to the last phase, it is very likely Ghana could meet the likes of DR Congo, Mali, Egypt and Senegal to make it to their fourth World Cup, after the glories of Germany 2006, South Africa 2010 and Brazil 2014.
Until then, we congratulate Andre Dede Ayew for chalking the centenary feat. We know it has not been an easy journey since his maiden appearance when invited by Claude Le Roy for the Black Stars’ friendly against Senegal and later the 2008 AFCON that Ghana hosted.