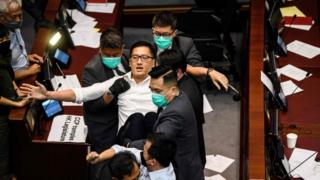 China is proposing to introduce a new security law in Hong Kong that could ban sedition, secession and treason.

The move is likely to provoke strong opposition internationally and in Hong Kong, which last year saw months of pro-democracy protests.

China’s delayed National People’s Congress, its legislature, will debate the issue when it opens on Friday.

Hong Kong’s mini-constitution requires it to bring in such a law but it failed to do so amid widespread opposition.

The so-called Basic Law was introduced when the UK handed back Hong Kong’s sovereignty to China in 1997 and provides certain freedoms not available on the mainland.

The Hong Kong dollar dropped sharply yesterday in anticipation of the announcement.

The issue has been introduced on the NPC agenda, under the title of Establishing and Improving the Legal System and Enforcement Mechanism of Hong Kong. The opening of the NPC had been delayed because of the coronavirus outbreak.

A spokesman for the NPC said yesterday that China was planning to improve on the “one country, two systems” policy that Hong Kong has observed.

Zhang Yesui said: “National security is the bedrock underpinning the stability of the country. Safeguarding national security serves the fundamental interest of all Chinese, our Hong Kong compatriots included.”

Beijing has always had the power to enact the national security law into Hong Kong’s Basic Law but has so far refrained from doing so.

But Hong Kong is heading for elections to its own legislature in September and if last year’s success for pro-democracy parties in district elections is repeated, government bills could be blocked.

A mainland source told the South China Morning Post that Beijing had decided Hong Kong would not be able to pass its own security law and the NPC would have to take the responsibility.

Hong Kong’s government had tried to enact the so-called “sedition law” in 2003 but more than 500,000 people took to the streets and it was dropped.

China has the option to impose it into Annex III of the Basic Law, which covers national laws that must be observed in Hong Kong.

It is almost certain to do so, both in Hong Kong and abroad. -BBC