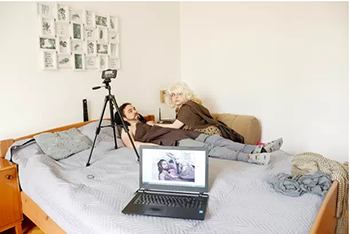 Bored by the weeks-long coronavirus lockdown? Not Hungarian film buffs Fanni and Norbert have recreated dozens of scenes in their flat from “Ghost”, the “Game of Thrones”, “Scarface” and other films using whatever household utensils they could find.

The couple’s photos quickly went viral on social media, and now they just can’t stop, coming up every day with new ideas.

“Inspiration struck when we were in the kitchen cooking,” said Norbert Hosszu, 30, as he prepared to put on a wig to act out a scene in which Tyrion Lannister pours himself a glass of red wine at his wedding in the “Game of Thrones”.

His partner, Fanni Kovacs, 26, said she had been making dough for potato scones when she remembered a scene from the film “Ghost” with Demi Moore kneading clay and Patrick Swayze embracing her from behind.

The couple, who used to work as improvisation actors before the coronavirus crisis hit, quickly recreated the scene in their kitchen using the scone dough. Viewers now write to them asking for more, and also asking for scenes from specific movies.

“Fanni and I have always liked to dress up, and when we were at university we went to a lot of costume parties. And of course we both love movies and work with theatre,” Norbert said.

Which scenes they select depends on what they can find at home: flour instead of cocaine, tinned tomatoes instead of blood, a vacuum cleaner instead of a gun among others.

“I just hope that these photos will bring a smile to people’s faces,” Fanni said.