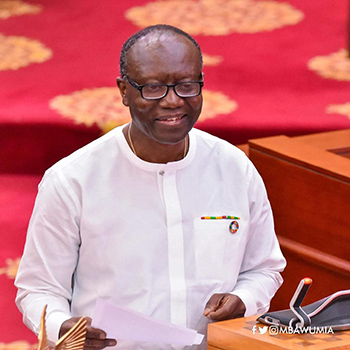 The disruption to social life, forced by the novel corona virus, was brought to bear yesterday when Parliament operated at half capacity; not by will, but by compulsion to stop the further spread of the respiratory disease.

Out of the 275 lawmakers, only 140, representing 50.90 per cent, were allowed onto the floor of the House when the Finance Minister, Ken Ofori-Atta, came to present the mid-year budget review and economic policy of the government for the 2020 fiscal year pursuant to section 28 of the Public Financial Management Act, 2016 (Act 921).

“The Minister [for Finance] shall, not later than the July 31 of each financial year, prepare and submit to Parliament a mid-year fiscal policy review” the section reads adding that the presentation should contain a brief overview of recent macroeconomic developments of government, an update of macroeconomic forecasts undertaken by government and an analysis of the total revenue and expenditure amongst others.

The legislators, in various shapes and colour of nose masks, sat a chair apart to comply with the physical distancing etiquette in compliance with the COVID-19 preventive protocol.

With admission to the House on ‘first come, first served’ basis, as outlined by Speaker Aaron Mike Oquaye on Thursday, MPs who arrived after the House was ‘full to capacity,’ had to observe proceedings on televisions in their respective offices or alternatively in the public gallery.

With the public barred from participating in this year’s exercise, the gallery, which used to house diplomats, traditional rulers, other dignitaries and the local and international media at such events was virtually empty.

Before the two-hour presentation by Mr Ofori-Atta started at about 1pm, the MPs chit-chatted at considerable distances all in compliance with the COVID-19 preventive protocol.

Dressed in all white, Mr Ofori-Atta’s presentation was interspersed with periodic cheers, jeers and boos from either side of the House depending on what they heard.

Unlike in the past where the cheers and jeers virtually made hearing finance ministers on such occasions difficult, there was calm and order in the House making Mr Ofori-Atta audible.

While at it, the MPs could be seen taking notes; probably in preparation for the debate on Monday. It could be said that the House was generally decorous parting away from previous presentations where placards were displayed to convey messages.

The House, however, bounced back to life after the finance minister finished his presentation at about 3: 00 p.m. to a standing ovation from the majority side of the House.

Calling for a continuation in leadership as he concluded his presentation, Mr Ofori-Atta said the President, Nana Addo Dankwa Akufo-Addo government was the best to steer the country out of the economic quagmire forced by the coronavirus pandemic. Minority Leader, Haruna Iddrisu, seconding the motion for adjournment described the presentation as a “sermon of manifesto promises and pledges rather than mid-year budget review,” to loud laughter by his caucus.