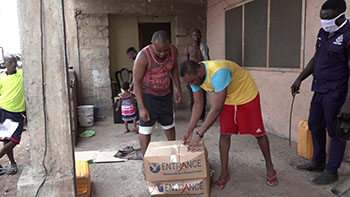 Chairman of the Tobinco Group of Companies, Elder Samuel Nana Amo Tobbin I, on Sunday visited some poor communities in Accra to distribute 2000 boxes of packaged food items to the needy and the vulnerable.

The donation was aimed at supporting slum dwellers who had been deprived of their daily bread following the three-week lockdown imposed by the government to contain the rapid spread of the coranavirus.

Another reason for the house-to-house food distribution according to Nana Amo Tobbin I, was social distancing.

He explained that the overcrowding that characterised the distribution of food by some organisations was not the best as it poses health risk to the beneficiaries hence the need to use a safer method to distribute food to the needy.

According to him, the excitement and joy on the faces of some of the needy residents, was an indication that people genuinely needed help in these difficult times but they did not know where the help might come from.

Some of the beneficiaries who expressed their appreciation for the kind gesture said they starved on certain days. The arrival of the Tobinco trucks and vans was for them an answered prayer.

Nana Amo Tobbin I, commended individuals and corporate organisations for complementing government’s efforts to feed the needy in these difficult times and further called for more of such support as the nation combats the pandemic.

He suggested the use of mobile money as one of the methods to help the needy.

He urged all Ghanaians, particularly the vulnerable to observe all the personal hygiene protocols outlined by the government and health institutions to combat the pandemic in the country.

Tobinco first partnered the Church of Pentecost to donate medical supplies to nursing and midwife trainees followed by the donation of medical supplies worth over GH¢250,000 to the Ministry of Health to combat the pandemic in the country .