Creative arts stakeholders commend government for “Beyond the Return” masterclass 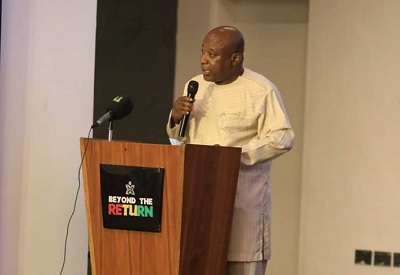 Stakeholders in the creative arts have expressed appreciation to government’s commitment to foster some development collaborations with the diaspora to sharpen the craft of players in the sector.

According to them, last Masterclass dubbed Beyond the Return Conversation aimed at divising mechanisms for Ghanaians and people in the diaspora to tap into each other’s expertise and take advantage of the opportunities available, was a step in the right direction.

The masterclass which was a conversation Beyond the Return, was a platform to network and foster collaboration for development of the sector.

Beyond the Return is a 10-year project which follows the Ghana’s Year of Return initiative last year, which commemorated the 400th Anniversary of the arrival of the first recorded enslaved Africans in Jamestown Virginia in 1619.

The initiative under the theme, “A decade of African Renaissance – 2020-2030” will be built on 7 pillars which will provide a platform for engagements among the people of African descent, wherever they may be living currently.

The Masterclass which was one of many centred around such discussion, was held on Wednesday, September 30 at the Kempinski hotel under the theme, Black Stories Matter; forging collaborations for the development of Ghana’s creative industry.”

This programme was well attended by top-brass of the creative arts industry, in the country, with expert presentation by top-notch creative arts players from the diaspora via social media meeting platform, zoom.

The Masterclass moderated by Professor Eleanor Earl, a film and television producer, an entrepreneur and Director of Film Studies and Hampton University in United States of America, had Hollywood Directors, fashion icons and world celebrated creative arts industry experts told the black stories and how both parties, ie Ghanaian creative arts players and those in the diaspora could collaborate for the good of the industry.

The panel touched on the need to build infrastructure and train people to be able to learn from the mistakes of other countries to properly position the creative arts for the development of the country.

They were of the view that the black race had a lot of amazing stories which could be told to the rest of the world through the creative arts.

The discussion highlighted the need to always look for opportunities to turn them into success stories and the power of collaborations in the arts.

The Deputy Minister of Tourism Arts and Culture, Dr Ziblim Iddi Barri in his address said he was pleased to join the masterclass, which would be pivotal for the “beyond the return” agenda.

He commended the Ghana Tourism Authority, Creative Arts Council, BridgeZone among others for coordinating such an event, adding that the government recognised each and everyone for making this possible.

“From music to fashion, theatre and animation, visual arts and design , Ghana’s creative arts has the potential, and it is for that reason government has paid much attention to it,” he said.

Dr Ziblim said the Beyond the Return was a 10-year programme, and he was optimistic that regardless of the COVID-19,  the impact of the programme would be of benefit to the country.

He was certain that considering how the  Year of Return sparked a global movement for Ghana and Africa,  the new dimension would also improve on the fortunes of the people.

Chief Executive Officer(CEO) of Ghana Tourism Authority, Mr Akwasi Agyemang said, the masterclass served as a platform for network, for which follow-ups would be made.

President of the Creative Arts Council, Mark Okraku Mantey was optimistic that the knowledge and the contact acquired from the programme would be put to good use.

Chief Executive Officer, (CEO) of Ghana UK-Based Achievement Awards (GUBA) and a board member of GTA, Dentaa Amoateng, said they would form smaller groups of people in the Creative Arts to be able to reach out to the people in the diaspora to tap their expertise.

She was impressed about the level of participation of industry players, saying it was the beginning of a successful journey.