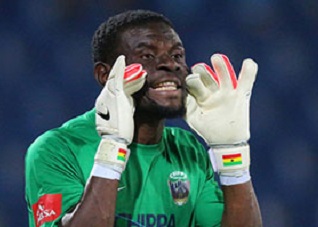 When you hear the distressing statement: “Wonders will never end,” the speaker may have been racked by an uncomfortable stunning revelation.

Perhaps, in the same vein, one will be compared to borrow that disquieting phrase in response to a statement by former Black Stars goalkeeper Fatau Dauda that sought to blame Ghanaians for the Black Stars’ shambolic performance at the Brazil 2014 World Cup tournament.

He told Atinka TV that Ghanaians had to share in the blame for the let-down. How?

Hear him:”If you ask me that question, the best answer is that everyone – including Ghanaians must be blamed. Like I said, we all caused it because nothing happened among us (Players],”he said, proceeding to deny any fracas in the team’s camp.

“I didn’t see any fight among players, maybe it happened and I didn’t see. We never said they should pay us before honouring the final group match against Portugal,” he told Atinka TV last week.

Blue blistering barnacles! How on earth would you attribute the Stars’ not-up-to-scratch output to the fans – some of whom had fasted for the team to drive beyond the quarter final berth of South Africa 2010 – to make it to the last four.

Question is, what role did Ghanaians play in the Stars’ 1-2 loss to USA in the team’s opening game? In a post-match interview after the loss, did Coach Kwasi Appiah not say he rested his ‘killer players’ strategically because he wanted his opponents to run out of steam before introducing them?  Did Ghanaians motivate that ham-fisted inept decision?

Now, after holding eventual winners Germany to that intriguingly pulsating 2-2 draw in the second group game, Ghana needed to defeat Portugal to qualify to the next round. But what happened? Dauda incredibly gifted Portugal’s poster-boy Cristiano Ronaldo a cheap goal – a howler that culminated in the Stars’ 2-1 loss – ultimately eliminating them from a tournament experts had tipped them to go far.

Indeed, none of Ghana’s players in the Brazil 2014 tournament have the moral justification to criticise anybody because they let down the nation fatally when so much was expected of them.

They demanded a $100,000 appearance fee; held the nation to ransom – and broke the nation’s heart even though they were handed the monies they requested before the crucial Portugal game.

That key players: Sulley Muntari and Kevin-Prince Boateng were fired from camp ahead of the final game was an indication of the fact that all was not well.

What, perhaps, Ghanaians want from Dauda is to render a grave apology for that fatal howler and not to apportion unnecessary blame on the clean-handed.

Good such characters are no more part of the present national team. They have seen their best, and we can only look forward!