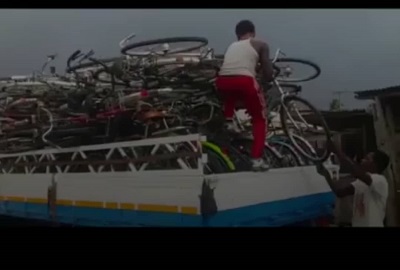 An aspirant whose dream to represent Assin North constituency at the just-ended New Patriotic Party (NPP) Parliamentary primaries, was shuttered has gone back for all the bicycles he donated to delegates after an excruciating defeat.

The aspirant, Eric Amankwa Blay, prior to the elections shared 250 bicycles to each of the polling stations in the constituency.

It came as a surprise to him, that at the end of the counting, he had only secured 44 votes as against the incumbent MP Abena Duruwa Mensah who polled 389 votes.

Feeling betrayed, Mr Blay, and his supporters stormed various houses of delegates in the constituency to retrieve the bicycles shared among party members, and packed them into a Kia truck.

Speaking to the media, he said the unit cost of the bicycle is GH¢300, and apart from the bicycles, Mr Blay claimed he had given each delegate and constituency executives envelopes to endorse his candidature.

According to him, “I’m not taking back the money but as for the bicycles, I need them back,” he said

He added that failure to endorse his candidature means you don’t like the bicycle.