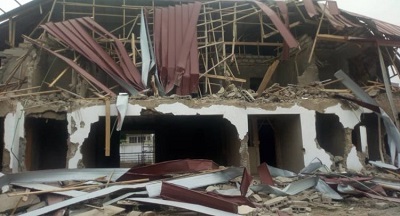 The Paramount Chief of the Osu Traditional Area Nii Okwei Kinka Dowuna VI has refuted the claim that a building demolished at West Ridge in Accra over the weekend was situated in the Nigerian High Commission.

According to him, it was on a piece of land belonging to the Osu stool which the high commission had trespassed upon and that there had never been a purchase of any tract of land from it by the Commission.

“The said parcel of land belongs to the Osu stool and is to be used for purposes only agreed upon by the stool and its council of elders”, a statement he issued in Accra on Sunday said.

Over the weekend, armed men with bulldozers demolished the uncompleted apartments which were being constructed to house staff and visiting diplomats to the High Commission.

The Ministry of Foreign Affairs and Regional Integration, in a statement, issued on Sunday, condemned the incident, citing diplomatic concerns and said it would investigate.

According to the traditional council, it came to the attention of the stool last year that the original building on the parcel of land had been demolished and was being replaced with a new structure.

It said it was also learnt that the structure was being erected by a Nigerian business man who, was forcibly trying to take over the said parcel of land with support of the office of the Nigerian High Commission.

According to the statement, the stool was informed that the structure was intended to be an entertainment complex for commercial purposes and not a block of flat for the commission as it had been claimed.

Because of the high level of respect the stool has for foreign missions, it said the trespasser had been informed of the ownership of the land through their own security personnel on several occasions and invited for discussion.

“There has till date been no response or acknowledgment in response to the stool’s invitation nor has the trespasser proceeded to submit any documentation of permission upon which it demolished the original structure on the land and proceededto erect a new structure.

“The trespasser has openly and with impunity disrespected the Osu stool by its attendant behaviour”, it said.

The statement said authorities including officials from the Lands Commission, the Cantonments Police and Police Headquarters invited the intruders to produce documentation for the tract of land but to no avail.

“The Osu Stool remains the owner of the said parcel of land and wishes to notify the general public that all other intended users of the property must first seek the permission of the stool.

The statement said this is the second attempt to forcibly takeover Osu land by unknown persons with political influence of the Nigerian High Commission and cautioned the public against such acts.

Meanwhile, the Minister of Foreign Affairs and Regional Integration, Madam Shirley Ayorkor Botchwey, yesterday visited the site, where she apologised to the High Commission and assured both countries of transparent investigation.

“It was not a government-sanctioned activity”, she stated.