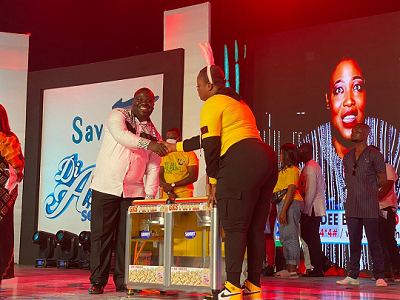 A caterer, Dee Baby who was adjudged winner of the just ended plus size dance reality show, dubbed Di Asa organised by Atinka TV, has pledged to embark on a sensitisation campaign.

Dee Baby, who represented the people of Tamale in the Northern Region beat all 14 finalists to be crowned the winner at the grand finale held at the Grande Arena-Accra International Conference Centre on Monday, December 28.

For her prize, she took home a brand new Hyundai Accent, a popcorn machine from Sambot Industry, a cash prize and other prizes from the sponsors of the show.

Fafa, who came second received a brand new Mini-Truck (Abosey Okai Macho), a cash prize and prizes from the sponsors of the show.

For the third position, two of the finalists had the same marks after votes were collated together with the marks from the judges.

The two, Maame and Naa Dollar who jointly occupied third position jointly were both given a tricycle (Aboboyaa) respectively and other prizes from the sponsors.

The fifth position went to Amonor who also had a cash prize and products from the sponsors.

Speaking exclusively to The Spectator, Dee Baby said, “it feels good, I don’t know what to say, it was competitive, but I believed and saw myself as the winner of the competition, and at the end of it all, it came to pass,” she said.

Dee Baby disclosed that this is the time for her to work hard and change the perception of the people of the Northern Region about reality shows, and the need to get involved.

As part of this, Dee Baby said she would organise education campaigns among other activaties to ensure religion did not become a hindrance to participating in such programmes, especially Di Asa.

“This is the time I am going to work, Northerners, I have to get them involved, some have this mentality about such programmes because of their religious beliefs. I am going to organise and change the perception,” she said.

According to her anytime reality shows like Di Asa visited the enclave for auditions it was always difficult for people to volunteer due to religious beliefs  among others, adding that husbands do not willingly allow their wives to take part, thinking they would be exposed.

Dee Baby believes that such programmes have some positive societal impacts and must be encouraged to bring transformation.