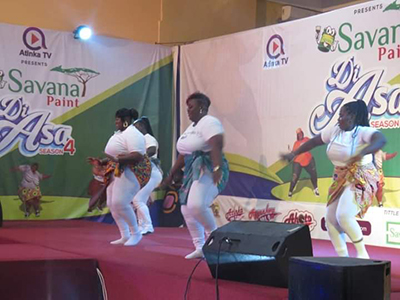 Atinka TV has launched season 4 of television reality show for plus size women, dubbed Di Asa with some changes as a result of coronavirus pandemic.

As part of the measures to fight COVID-19, there is going to be two weeks isolation and testing of the 40 contestants who would be selected after a nationwide audition.

Activities for this year’s season dubbed, “Staying Safe through Entertainment” include cooking contest, cultural day, talent night among others.

Speaking at the launch which took place at the IKA Hall at the Atinka Media Village(AVM), last Friday, Deputy Managing Director of AVM, Mr Kingsley Nsiah-Poku, said, but for the COVID-19 restrictions, the event would have taken place in April.

According to him, even though the restrictions had been eased, they would adhere to the various protocols put in place by World Health Organisation (WHO) and Ghana Health Service (GHS).

He said that the competition was not only about dance, but  healthy living and economic empowerment  of women and indicated that the show had in the past won acolades from many accredited organisations, given  cash and other prizes  to beneficiaries, as well as  confidence to plus size women.

He said the prizes for this edition included a saloon car, mini truck, and a tricycle among other items.

Mr Nsiah-Poku thanked Nana Amo Tobin, the Chairman of the Tobinco Group of Companies, the brainchild of this reality show and sponsors for their unflinching support.

Producer of the programme, Mr.Afrifa Peasah said there had been changes this time round as a result of COVID-19, as such the events would not be held at  market places, but in communities  and at conference centres across the country.

He said all the 16 regions would be visited starting from towns like Oda, Koforidua, Bolgatanga, Wale Wale, Tamale, Bole, Sunyani Goaso, Kejetia, Konongo, sefwi Woaso, Sekondi, Swedru, Kasoa, Dambai,  and Aflao among others.

Finally, the audition team would come to Accra, and visit places like Chorkor, Mallam Atta Dome, Kaneshie among others to wrap up the process for the commencement of the main show.

He said that as part of the innovations introduced in this season, the morning shows of the TV Station, would be held at settings, where they would organise the competition across the country to offer a different opportunity to members of the communities.