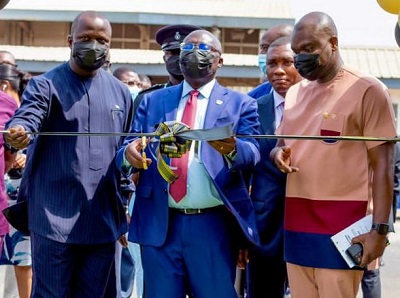 Ghana’s quest to embrace modern technology for economic progress is steadily gaining grounds as the government is leaving no stone unturned in ensuring complete success in the digital space.

In light of this, the Vice President of the Republic of Ghana, Dr ()Alhaji) Mahamudu Bawumia, who is instrumental in digitisation, launched the Digitalised National Assay Laboratory at the Avance Cargo Village at the Kotoka International Airport, Accra, on Wednesday, March 2, 2022.

“I am very happy to be participating in this function which ties in very well with Government’s agenda; an agenda that I have spearheaded under the auspices of His Excellency the President of the Republic, H.E. Nana Addo Dankwa Akufo-Addo. The goal is to streamline governance by cutting down on the human interface and making processes digital and more efficient.

“Digitisation has also made it possible to monitor in real time, gold exports passing through the National Assay Laboratory: Additionally, it has improved collation of timely data on gold export figures and revenues in order to aid national economic planning.

“As we are aware, Government is already transforming the governance of various sectors of Ghana’s economy through digitisation. Government’s digitisation drive is a key component of the overall economic strategy because the Fourth Industrial revolution is upon us and Ghana must take advantage of it if we are not to be left behind.

“There is a growing body of empirical evidence that illustrates the capacity of digital technology to create jobs, significantly boost productivity, increase income and support wealth creation,” Dr. Bawumia emphasised.

Mr. Samuel Abu Jinapor, Minister of Lands and Natural Resources also said that the ministry with its agencies since 2021, had committed to government’s digitalisation agenda to move some of its essential services online for effecient service delivery to reduce corruption and interference by middlemen.

The Managing Director of Precious Minerals Marketing Company (PMMC) Nana Akwasi Awuah stated that “since the commencement of the National Assay Programme till date, PMMC has been able to assay a total weight of gold of about 18million Ounces at an estimated total value of 27 billion United States Dallars”.

Nana Awuah gave his full assurance to the fact that “this year PMMC shall work together with the Minerals Commission to develop a traceability system to track the chain of custody of gold dore right from the producing miner to its final destination”.