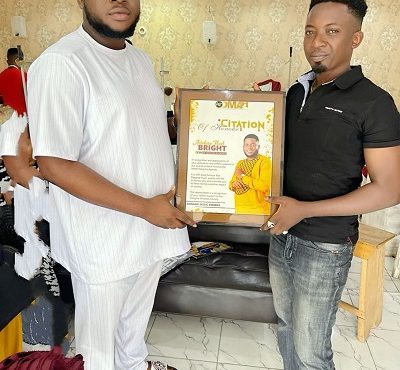 Organisers of Dangme Music Awards(DMA) have honoured the Chief Executive Officer (CEO) of Avalon Klodins, Bright Adekesu Narh with a citation for his contribution to the promotion of Dangme Music.

According to the Chief Executive Officer (CEO) of the awards scheme, Otumfuo Ayiku Solomon popularly known as Bra Levels, the gesture formed part of his outfit’s motivational package to celebrate organisations and individuals who had played crucial role in the promotion of Dangme music and the awards scheme.

In an interview with The Spectator after a short presentation ceremony on Wednesday in Accra, Otumfuo Ayiku Solomon indicated that the citation was also to celebrate Mr Narh’s 30th birthday.

He noted that Mr Narh had been a great financial contributor to the DMA, thus the awards board deemed it appropriate to honour him.

“In recognition and appreciation of your dedication and selfless support to our awards scheme towards the better Dangme Agenda. It is with great honour that Dangme music awards will like to honour you and motivate you to keep having a positive impact on society,” part of the citation read.

Receiving the citation, Mr Narh thanked the organisers of DMA for the honour and promised to continue supporting the awards and Dangme music.