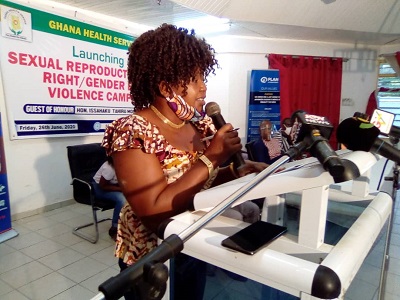 Whilst frontline workers are battling to save the lives of patients from the deadly coronavirus disease (COVID-19) infection in the country, some wives in the Upper West Region are also battling their husbands over too much sexual demands as a result of the CODVID-19 stay-home protocol.

The high demand for sex has been fueled by the inability of some men to patronise other women such as commercial sex workers and ‘side chics’ in addition to their wives, due to the fear of contracting the disease in the process, and therefore have to rely solely on their wives for sexual satisfaction.

A Station Officer at the Domestic Violence and Victims Support Unit (DOVVSU) of the Upper West Regional Command of the Ghana Police Service, Inspector Stella Niabi, who disclosed this at a meeting at Wa said this had led to physical abuse of some of the women who had refused their husbands sex.

The campaign would among other things ensure access to SRHR services as well as protect vulnerable groups, such as women and girls from abuse, in the midst of the COVID-19 pandemic.

“Wives have been sexually abused by their husbands because they denied them access to their bodies after they had had enough of the” stay-home” sex, especially during the lock down because of the fear of contracting the disease, the men say they are unable to patronise other women,” she said.

She stated that most of those cases were treated as civil cases and were resolved through counselling and other negotiation alternatives that had yielded positive results to the satisfaction of the parties.

Inspector Niabi explained that the CODVID-19 break from school had also led to quite a number of teenage pregnancies and sexual abuse of children in the region.

“Most of these teenage pregnancy cases come to us because the victims come to report the men who deny the pregnancies after they have put those innocent girls in the family way,” she said.

Touching on other abuses, the Station Officer said girls had become more vulnerable in the CODVID-19 season as they were over burdened with house chores and other responsibilities whilst their male counterparts idled about.

She explained that the girls were in some cases subjected to beating when they were unable to perform the many responsibilities they were assigned to at home whilst the males went scot free even after doing nothing the whole day.

“We have these and several other reports of abuses at home due to CODVID-19 pandemic, and so we are very grateful to Plan International Ghana for introducing a programme that would cater for these developments,” she added.

On his part, the District Development Coordinator of the Upper West Regional Programme Unit of Plan International Ghana, Mr Kamaldeen Iddrisu, hinted that the rampant media reportage on sexual and gender-based abuse informed their decision as an organisation to introduce a programme to address these issues.

“We have  trained some young ladies from Wa, Sissala East, Wa West, Wa East and Sissala West Municipal and District Assemblies on the making of re-usable nose masks as well as sanitary pads to help them earn income in this CODVID-19 season to limit their dependence on men and subsequently limit abuse,” he said.