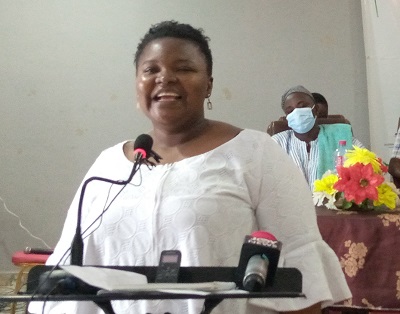 Married women who intentionally deny their husbands sex as a form of punishment commit offence that amounts to domestic violence, the Upper West Regional Director of Department of Gender, Mrs Charity Banye has said.

“If you are capable of indulging in sexual relations with your husband as a married woman and you constantly refuse him because you are angry with him instead of using dialogue, then you are abusing him and infringing on his rights”, she stressed.

Mrs Banye who was speaking at a stakeholders’ meeting on ending sexual and gender-based violence (SGBV) at Wa defined abuse as “any act that causes physical or psychological pain to another person.”

“Some women resort to wearing tight-fitting jeans to bed because they have issues with their husbands so that the husbands would not have access to their bodies, yet when the men refuse them housekeeping money (chop money) the next day, they call for the heavens to come down”, she said.

The director stated that instead of denying each other sex as a way of resolving conflicts, spouses should rather use effective inter-personal communication to get their domestic issues resolved.

She further stated that heaping insults on men was a serious form of abuse that could hunt them for several days and increase their inferiority complex such that they would begin to withdraw from their wives in order to find solace in other women (side chics).

“Some women have weapons of mass destruction up here [pointing to her lips] and can rain insults on their husbands at the least opportunity, even in public”, she stated, and pointed out that even when the husbands sought to apologise for things they did not do right, some of the women responded to their efforts with insults.

Mrs Banye stated that such habits from women often drove the men away from home whereas others who were very quick tempered also resorted to physical abuse which she described as unfortunate and condemned vehemently.

She encouraged wives to be modest in their speech and the men to relax their egos in dealing with each other such that abuses would be minimised in marital homes.

She said that some men were also infamous for economic abuse such that they failed to establish businesses for their wives, whereas others refused to also provide financially for the house.

“There was this case where a man stopped his wife from working because he did not want other men to make advances at her. I was curious to meet the ‘miss world’ he was keeping at home and when I finally did, she told me how she wanted to work but was prevented from doing so”, she cited, and called on couples to make their homes lively for themselves and their children.

On  his part, the Regional Commander of the Domestic Violence and Victims Support Unit (DOVVSU) of the Regional Police Command, Assistant Superintendent of Police (ASP) Adongo Apiiya called on men to empower their wives economically by making them aware of their salaries.

He said if men informed their wives about their earnings, they would be able to make sound budgets at home in accordance with the man’s total income and not make unreasonable demands.

“When you get home, give your pay-slips to your wives, inform them when there is an increment and involve them in planning the expenditure process so that they will give you peace of mind”, he added.