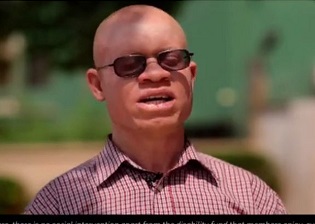 Ghana Association of Persons with Albinism (GAPA) has pleaded with politicians in the country to desist from killing them ahead of the 2020 general elections.

According to Newton Komla Katseku, the National Director of GAPA, it is a known fact that some people use albinos for rituals hence the call on politicians.

He said their safety is not guaranteed in many areas of the country where primitive customs and beliefs make people tend to perform rituals with the blood of an Albino for power.

“The fear is that as we know they have been using parts of our bodies for rituals so maybe somebody will want to come to power and that is their beliefs that if they use our parts of bodies they may win power.”

So sometimes some of us the fear is there during election time so when you are going out you wish to go and come back early so that you don’t go and meet somebody who will kill and use you for rituals”.

“As for me during election time my brothers tell me to stay home so that nobody kills me for sacrifice so it creates anxiety anytime I go out,” Some persons with albinism lamented.

“You cannot separate Political power from ritualism. The presentation that I have done indicates there are reports that suggest that persons with albinism have been used for sacrifices in quest of power from 2008 election till date in Ghana. And it is happening physically in some of the neighbouring countries in Africa.

“It is something that we need to guard against. Properly, what we need to do is to hold political stakeholder engagement so that we explain to them if you take the life of somebody for power whom are you going to rule in future. So persons with Albinism will continue to cry and call for protection before, during and after the election” Newton Komla Katseku told Starr News.