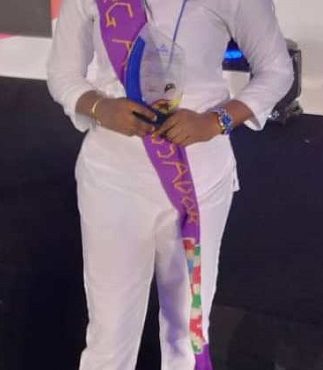 She grew up in Suhum in the Eastern Region but lost both parents at a tender age. Her father died when she was 15 and her mother also passed on three years later.

Due to financial constraints, her dream of becoming a Lawyer could not materialise as she was unable to further her education beyond Junior High School.

Determined to make ends meet nonetheless, she took up petty trading while living with an elder sister at Madina in Accra. Many years on, she has found her way in construction as a professional tiler and is helping other young ladies tap the opportunities in this sector.

This is the story of Ms. Doris Deku, Chief Executive Officer (CEO) of Ansadee Ventures and Ambassador for Artisans Association of Ghana (AAG).

When The Spectator caught up with her last Friday, she and her team had started a tiling project on a three-storey building in Accra.

Explaining how she has become a highly sought-after tiler in Accra, the 29-year-old said that she used to sell cooked food at construction sites in her area after completing basic education.

“On one of my rounds at the site, I interacted with a worker on how I could be trained as a tiler. I had been observing them for sometime and I thought it would be an easy job for me,” she recalled.

According to her, some of the workers had told her that “tiling is not for ladies and not the same as preparing food for sale.” This ridiculous comment, she noted, were meant to “kill her passion’ but it rather sparked her interest further and did not damper her spirit.

As fate would have it, on one of her food selling rounds, she chanced on an opportunity offered by the Youth Inclusive Entrepreneurial Development Initiative for Employment (YIEDIE).

The five-year project, implemented by Global Communities in partnership with Mastercard Foundation, is designed to “create economic opportunities in the construction sector for economically disadvantaged youth.”

Doris decided to join the programme but initially opted for training in interior decoration. Upon realising that a lot of her compatriots had chosen this particular course, she switched to learn the rudiments of tiling instead.

“I told myself I would try tiling because I have never seen a female doing this job,” she said.

According to her, some pessimists had doubted her success in the field during the first week of training but she was bent on finishing what she had started.

“When my trainer was away some workers would tell me to quit and find a better alternative but I kept telling them that even if I did not succeed, the knowledge I acquired would be enough achievement for me,” she said.

After completing the six-month intensive training in 2016, Doris sat the National Vocational Training Institute (NVTI) proficiency test and continued to understudy her “Master”, Mr. Nicholas Agbotse, for another one-and-a-half years.

“On a visit to a construction site, a fellow artisan spoke to me about a tiling job. The building project was behind schedule so they needed more hands to complete the tiling project. I did not have all the tools for the job so I decided to partner other colleagues in order to use their tools,” she said.

This was how the tenacious woman executed her first contract successfully and had since been getting recommendations for other projects.           Subsequently, she joined a real estate development company that relied on her expertise anytime there was a project.

With an initial grant from YIEDIE, she registered her company in 2017 and currently has 14 trainees, comprising 11 girls and three boys, and seven other permanent workers.

Although she is impressed that more young ladies now look up to her, the AAG Ambassador said she would do more for herself and other young girls in the industry.

“I want to train more ladies in tiling and form an all women artisan group to encourage other women to tap the opportunities in the construction industry,” she said.

Doris says she now has many of the equipment required for the job but plans to get other mechanical ones to speed up her work.

The CEO maintains that there are opportunities in the construction sector, apart from tiling and that young people, especially females, should strive to make a mark in the sector.

She says that the initial hurdles are inevitable but the benefit would certainly come when ‘we put our minds to it.”

“Tiling is all about beautification so I am always proud of myself when people are satisfied with my work after completion,” she has said.

The graduate of Umabun Hatab Islamic School at Madina Zongo has urged artisans to remain committed to their task and allow their professionalism to “speak for them.”

Doris, the youngest of five siblings, has said that her progress is not by her might but by the “will of God,” and remains grateful to Mr. Agbotse who trained her at the initial stages at no cost.