Dr Anabah, agent of change in the health sector 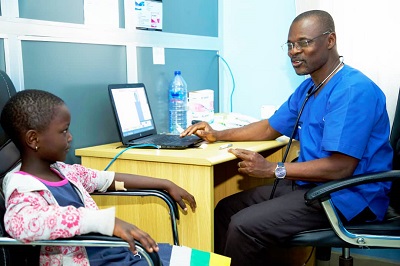 Dr Thomas Winsum Anabah is a professional medical doctor whose specialties include critical care, emergency medicine and anaesthesiology. He is among the few medical doctors with such specialties.

He is experienced in Health Management with practical approach to problem solving and has a knack for “see things through” to a successful completion.

Challenges in his early years could not kill his vision of becoming a health practitioner and he has over the years continued to contribute effectively to providing quality service in the health sector.

The Spectator caught up with him recently to delve into his professional and personal life.

Dr Anabah hails from a town called Garu, in the Worikambo Electoral Area in the Upper East Region.

The talented medical doctor has six siblings, from the late Joseph Anabah and Mrs Veronica Anabah.

Having an indefatigable father who occupied portfolios of a teacher and politician, Dr Anabah had his primary school education in a haphazard manner.

Dr Anabah’s middle school education was not a “straight” one as he moved back and forth from Worikambo and Winanzua middle schools and later proceeded to Bawku Secondary School until he got a scholarship in 1988 to study in Cuba.

While in the High School, everybody thought Dr Anabah would read Cybernetics because he was a genius at Mathematics, Physics and Chemistry but he rather pursued his dream of becoming a medical doctor.

Attaining a higher feat and making his dream come true, Dr Anabah further attended Higher Institute of Medical Sciences at Santa Clara, Cuba where he studied Medicine from 1995 to 2001.

He was one of the best graduates in the entire university and was also the Best Foreign Student, who took awards in sports, culture among others.

Adding to his educational laurels, the never-say-never doctor enrolled at the Higher Institute of Medical Sciences in Havana, Cuba where he did his Specialist Anaesthesiology and Resuscitation from 2003 to 2007.

He again obtained a Masters in Critical Care and Emergencies from La Sapienza, University of Rome in Italy, from 2008 to 2009.

Dr Thomas Winsum Anabah rose through the ranks to become a force to reckon with in the medical field.

He began his clinical attachment at the Korle-Bu Teaching Hospital in October 2001 to January 2002 and then became a House Officer there from March 2002 to February 2003.

This hardworking and ambitious health professional later became a Medical Officer from March to October 2003 at the same Hospital.

Dr Anabah has been a United Nations Examining Physician since 2013 to date for the world body.

He was the Medical Director of Accra Regional Hospital (Ridge), Accra from February 2016 to May 2017 where he gave the hospital a tremendous facelift.

Dr Anabah has been the C.E.O of Habana Medical Service, Tamale since June 2017 to date and is also the Executive Director of African Centre for Health Policy Research and Analysis (ACH-PRA) from January 2018 to date.

Having a keen interest in the development of health systems in Ghana, Dr Anabah has put up a sterling performance in contributing his quota towards quality health delivery in the nation.

He again developed the first ever BSc Nurse Anaesthesia Programme in Africa and the programme is being rolled out at the University for Development Studies, Tamale, since 2001.

According to him, the programme has come to resolve a huge national problem by creating a clear career pathway for nurse anaesthetists in Ghana who hitherto had no opportunity for career progression in the specialty.

Dr Anabah told The Spectator that he had established and managed a private hospital called “Habana Medical Service” at Tamale which has received several awards both locally and internationally for the quality of care and management style.

“I was celebrated as a Humanitarian Hero by LifeBox Foundation, 2015 in the United Kingdom for my contribution in the development of anaesthesia in the world,” he boldly and happily stated.

He has established and funded a health facility policy think-tank; Africa Centre for Health Policy Research and Analysis (ACH-PRA), headquartered at Tamale.

The banku and okro soup lover likes reading, gardening, public speaking and sports and is a Rotarian, currently the Rotary Foundation Chair of the Tamale Rotary Club.