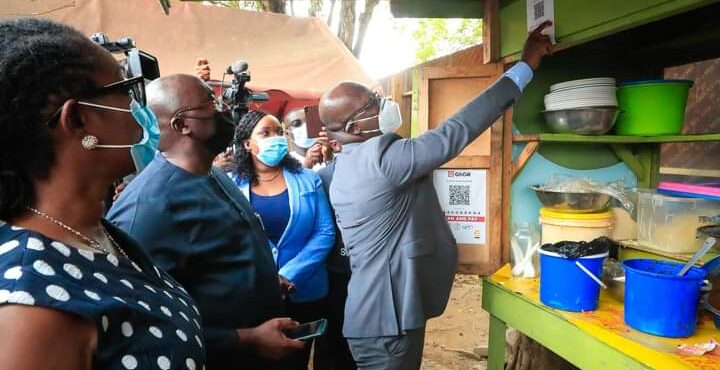 The use of the universal QR code according to Dr.Bawumia, will improve Ghana’s cash-light system, adding that under it, merchants are expected to receive immediate payment from the buyer.

He urged all merchants in the informal and formal sectors to acquire and start using the all-new, all-inclusive Universal Quick Response Code (QR Code) system developed for Ghana, as part of efforts by the Akufo-Addo government, to migrate the economy from a cash-based one to a cash-lite one.

“We are here to formally outdoor the Ghana Quick Response Code system or the QR Code, as it is known for short. It’s a very very historic day because we are solving a major problem here in Ghana and it is historic because Ghana will be the first country in Africa, to launch a QR Code payment system; and not only are we the first in Africa, we are also, as far as I’m aware, the third country in the world to do a Universal Quick Response System after Singapore and India”, the Vice-President said.

According to him, even the QR Codes systems of Singapore and India “only cater for bank customers” but “Ghana’s QR Code system will cater for both bank and non-bank customers”, explaining: “That is those who use mobile money as well as have bank accounts”.

“So, you scan the QR Code and then you can confirm that this is the merchant and I’m paying this amount to the merchant, so, it’s very secure in that regard; it is very convenient”, he observed.

According to him, in the era of COVID-19, technology comes in handy
“In this COVID environment, in fact, one of the ways you transmit the virus is by handling things like cash; e-commerce, too, doesn’t develop if you have a cash-based economy, so, we have been thinking, since we’ve been in office, of how to solve this problem: how do we move Ghana from this cash-based economy to an electronic payment-based economy?”