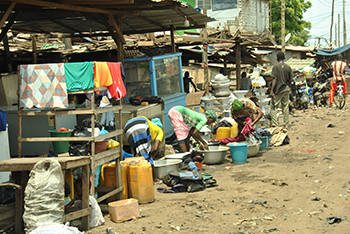 Dredging is progressing steadily on the Korle Lagoon barely a month after some structures at Old Fadama were removed to pave way for the exercise.

The demolition, early in April, had attracted some backlash from the public but authorities have justified the evacuation saying it was to avert future flooding in the area.

It is not clear how soon the removal of silt in the lagoon would be completed but it appears operators on site could have a huge task ahead.

Some contractors told our photographer Ms. Lizzy Okai on Wednesday that the remaining squatters along the lagoon have been cooperating with them while plans are underway to finish the work on schedule.

Excavators were seen deep in the lagoon scooping sand and other materials from it.

Some squatters who were far from the dredging site were seen going about their daily activities without hindrance.

Few weeks ago those who were affected by flooding and fire prior to the demolition received support from some benevolent orgainsations, including Caritas Ghana and Star Ghana Foundation. They presented some cash ranging between GH¢100 and GH¢200 to some affected persons.

In the wake of the COVID-19 pandemic, as well as the challenges faced by squatters in the area the question still remains; whether or not the people of Old Fadama would ever get a permanent and more decent place of abode.