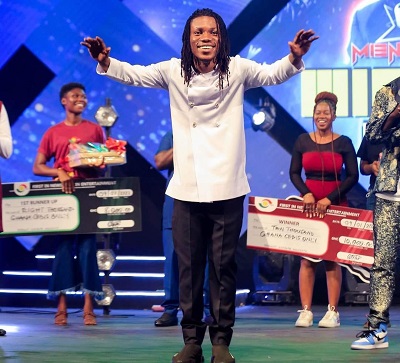 The announcement of De Sound Lord, affectionately called DSL as a winner of TV3 Mentor X did not come as a surprise to many as his performance from the commencement of the competition pulled many admirers to him.

The event held at the National Theatre on Sunday, January 9, brought together music lovers and industry players.

After many weeks of great performances from the 16 contestants, they were reduced to five, leaving the battle for the ultimate up for grabs by Konfidential, DSL, Wise B, AJ and Ely.

At the end, DSL was adjudged winner of the competition and for his reward, took home GH₵500,000 worth of package which included a brand new car, cash, promotional deals, and a record label contract with Richie Mensah’s Lynx Entertainment in addition to other products from sponsors.

Kofidential who emerged 1st runner-up also took home GH₵300,000 worth of package made up of cash prize of GH₵8,000 , distribution and promotional deal among others.

AJ, the Second runner-up took home GH₵200,000, worth of package, a cash prize of GH₵6,000, promotion on all Media General platforms, an international promotional deal, and prizes from sponsors among others.

GH₵4,000 cash prize, marketing and promotion on all Media General platforms and products from sponsors went to Eli who emerged third runner-up.

Wise B who emerged fourth runner-up took home GH₵2,000 cash prize in addition to marketing and promotional package on all Media General platforms.

There was exciting performances from Kweku Darlington, Kofi Mole, Kweku Bany and Mr.Drew among others .