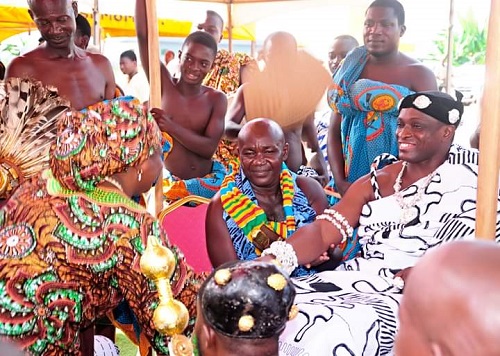 Cultural display was at its best in the Eastern Region during this year’s Regional Festival of Arts and Culture which was celebrated at the Koforidua Jubilee Park.

The Eastern Regional Police Band was also present to grace the occasion which was chaired by the Omanhene of New Juaben Traditional Area, Daasebre Kwaku Boateng III.

Speaking on the theme: “Re­viving Patriotism, Peace and Unity Through Cultural Diversity for Sustainable Development,” the Director in charge of Community Education and Youth Development (CEYD) at the National Commis­sion on Culture (NCC), Dr Akosua Abdallah said it was worrying to note that modernisation and globalisation had affected and continued to affect every aspect of national life and culture.

“You will go to a house and they are eating fried rice, noo­dles and other foods that are not Ghanaian. Where are our tradi­tional foods like ampesi, fufu and the rest? We need to go back and teach our children our traditional foods and culture and stop adopt­ing western culture which was depleting our culture,” she said.

She said there was an urgent need to imbibe into the youth, a sense of patriotism, nationalism, unity and a selfless ideal towards the country, adding that the NCC believed in a national strate­gy that sought to promote and sustain the interest of Ghanaians, particularly the youth and called for some stock-taking and deeper reflection on “our ideals so that we can teach our youth.”

She said the NCC was com­mitted to promoting the national culture and would continue to hold such events to promote the cultures to the international community.

The Eastern Regional Minister, Mr Seth Kwame Acheampong stated that the Culture and Creative Arts Industry was an essential component of the country’s econ­omy which was making significant contri­bution to national development.

“We consciously need to guard it by steadfastly holding on to it for employment and wealth creation and it is important to uphold the rich cultures handed to us by our ancestral heritage taking cognisance of its vitality and values,” he said.

He said the theme was apt since the country had allowed for western cultures to permeate the Ghanaian culture through technology, adding that the situation had caused a lot of indiscipline among the youth.