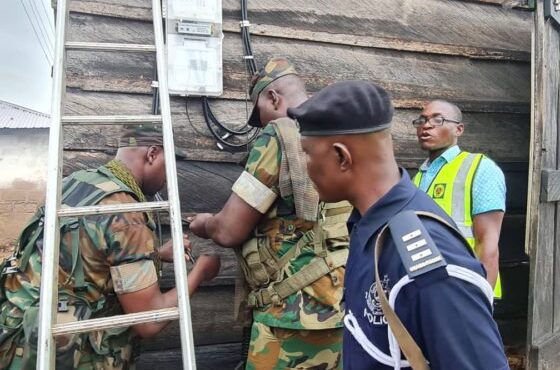 The deployment and presence of military personnel in the Krobo district in the Tema region by the Electricity Company of Ghana (ECG) has sparked fears among some residents who are raising questions about the mission of the armed personnel.

However, the ECG has watered down the fears of those who might not be privy to the rationale behind the deployment.

In an interview with Joy Business, Tema Regional Public Relations Officer of ECG, Sakyiwaa Mensah, said the personnel are to augment staff and contractors installing meters in the district.

“We are working in collaboration with the officers from the 49 Field Engineers Regiment to provide technical assistance for the installation of prepaid meters.

“ECG has had a long standing relationship with the Ghana Army spanning over two decades. In February this year for instance, we had one with them through our ECG Training School in Tema,” she continued.

Aside 50 electrical engineers from 49 Field Engineers Regiment, the company has drawn 90 extra technical staff from across its operational areas and contractors as part of the deployment.

Due to security challenges in the area, ECG field personnel and contractors are carrying out the exercise under armed police protection but this is said to be affecting the pace of the exercise,

“In other places, we usually are able to replace more than 300 meters in a day. The situation here is a bit slow due to lack of cooperation. For over two months, we could just install about 250 meters because of resistance,” Sakyiwaa lamented.

According to her, due to the lag in the exercise, the deployment will help them cover more grounds.

The company has received heavy backlash for its decision to introduce prepaid meters in Krobo district, despite having done same in other operational areas.

Some residents continue to accuse ECG of pushing the new meters down their throat but ECG strongly opposes this view.

It maintains it has since 2021 engaged relevant stakeholders including traditional authorities using various means including in person meetings, mass media, among others where necessary.

The Krobo enclave has drawn national attention over the last few years due to attempts by some residents to resist payment of power used since 2014.

As of December 2021, the district had a debt of about ¢70 million for power use from 2014-2017, but this has been ring-fenced after several multi-stakeholder engagements.

However, power used from 2018-2021 is to be paid in the next five years after engagement with stakeholders.

In what appears to be a direct response to deployment of electrical engineers from the 49 Field Engineers Regiment, some residents at Kpogunor in Manya Krobo hit the streets last week.

For them, it is surely going to be a showdown should any security agency or institution attempt installing the prepaid meters in their community.

The power distributor, however, seems unperturbed by the threats and not ready to blink first for carrying out a legitimate mandate.

ECG will, this, disconnect any customer who refuses the meters and will charge the customer for illegal connection should the customer reconnect.

The customer in this case will apply for the service should he or she decide to have meter after disconnection.

‘This is Ghana Exhibition’ takes off August 27

Insubordination cause of child neglect?