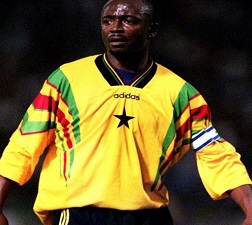 Liberia’s President George Oppong Weah who is the only African player to win the FIFA Player of the Year and the Ballon d’Or (European best at the time) topped the list, with Cameroon’s Samuel Eto’o Fils taking the second place, with his compatriot Roger Milla in third place.

Ayew who won the Africa Cup of Nations with Ghana in 1982 joined French side Olympique Marseille un 1987 and he was a key figure in their golden generation.

Marseille reached the final of the 1991 UEFA Champions League and lost on penalties against Red Star Belgrade.

However, they made amends in 1993 with Abedi Pele in the thick of event- the Ghanaian inspired Marseille to a 1-0 win as his corner kick was head home by Frenchman Basile Boli against AC Milan.

Abedi Pele became the first African player to win the African Footballer of the Year three consecutive times- 1991, 1992 and 1993.

France Football Magazine are the organisers of the Ballo d’Or, which is one of the most prestigious awards in football across the globe.