Examining the ‘conduct’ of 2 new DCEs 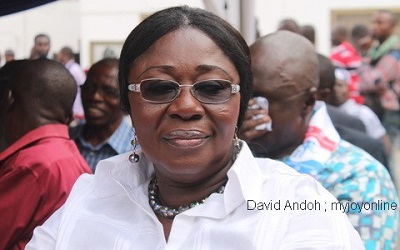 The Government just released the much awaited list of 260 nominees for the Metropolitan, Municipal and District Chief Executive positions across the country.

By law, their confirmation by their respective Assemblies will qualify them to assist President Akufo-Addo to govern the country at the local government level.

Mr. Lawrence Edutuah-Asiaw is now the newly installed District Chief Executive (DCE) of the Asikuma-Odoben-Brakwa District in the Central Region.

Mr Edutuah-Asiaw delivered an emotional speech after his confirmation at the Asikuma-Odoben-Brakwa District Assembly Hall.

His speech, reportedly touched the hearts of many people in the Assembly Hall, thus, moving some to tears.

He said when his name was announced as the nominated DCE of the area, he heard some people saying: “His mother is a beggar and for that matter, he does not deserve the DCE position.”

He stated; “because of politics people who have no idea about my upbringing, are saying my mother begs for food to feed herself and her children and questioned the basis of my appointment.”

A graduate with a degree in Education, Mr Edutuah-Asiaw said,  a lot of people expressed reservations about the sour comments made by such people about his appointment.

According to 29-year-old Edutuah-Asiaw,  he was rather inspired by such comments , “because if a beggar’s son can be elevated to such a position, by the grace of God, then truly there is nothing impossible for ‘the living God’.”

He said; “in life, God prepares people to shine lights in your path, and my mother is one shining example of a person who moved all odds to ensure that l received what she was not privileged to have, ” adding that; “that is the essence of humanity.”

Mr Edutuah-Asiaw pledged : “I will not disappoint my mother, myself, the President and the entire District for this honour done me,” stressing; ” I will serve the District with all the energy God has gifted me.”

He expressed his gratitude to all the people who played various roles in nominating and consequently confirming him as the new DCE of the District.

Mr Edutuah-Asiaw was among 22 aspirants in the District who were interviewed for the position of DCE of the area.

Some of the spectators who witnessed his confirmation gathered in small groups after the ceremony; with some whispering intently: “Who Jah bless, no one curse.

“Impossible is not a ring-tone of God; the future is unknown for all humans and it is not only the rich ones who must attract the eyes of God.”

All the 46 members of the Assembly voted “YES” to confirm Edutuah-Asiaw as the new DCE, thus, exceeding the two- thirds legal minimum requirement.

On Friday, October 1,  2021,  the President’s  nominee for the position of DCE in the Nanumba South District, Mr Issifu Zakaria was also reportedly confirmed by the 40-member District Assembly.

He obtained 28 YES-votes against 12 NO-votes, representing 70 per cent of the required votes to be approved.

Shortly after his confirmation, however, Mr Issifu Zakaria and his supporters allegedly seized the official vehicle of the Assembly which was being occupied by the out-going DCE who witnessed the ceremony.

Reportedly, the outgoing DCE was forced out of the vehicle and his belongings thrown out for the new DCE to take over the vehicle.

Eyewitnesses claimed, the outgoing DCE was left stranded and helpless until a Good Samaritan arranged for a private car to take him home.

It is said that “failure is an orphan” while “success even attracts very distant relatives.” Because the outgoing DCE was not re-nominated by the President, he has suddenly become an orphan while the new DCE is attracting more and more ‘distant relatives’ he hardly knows.

Some of the spectators who witnessed the embarrassing scene reportedly remarked; ” it is unfortunate the new DCE acted the way he did, disgracing the outgoing DCE who attended the ceremony to help confirm him as his successor.

“The new DCE acted without regard to formal ways of doing things. Is the vehicle not supposed to be handed over officially to him?

“If the seizure of the vehicle is an aspect of Mr Zakaria’s leadership style, then Nanumba South District will soon be plunged into chaos.

“Is it not the same Zakaria who led demonstrations in the aftermath of the NPP 2020 parliamentary primaries at Wulensi, leading to destruction of the party’s office and the party’s pick-up vehicle; because his preferred candidate failed to win the primaries? “

Wikipedia defines ‘conduct’ as the manner of guiding or carrying oneself; personal deportment; mode of action and mode of behaviour. In effect, ‘conduct’ means a person’s behaviour, especially from the standpoint of morality and ethics.

It is by proper and thorough investigation that the truth of the matter will be established.

And if found culpable, this column strongly recommends that Mr. Zakaria must be severely sanctioned to serve as deterrent to other new DCEs who are cast in his “terrible mould.”