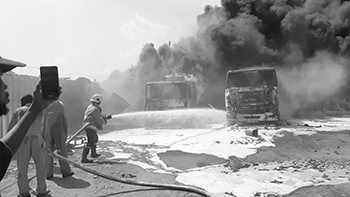 On Wednesday, a two-year-old boy died when two diesel tankers exploded and caught fire,  near the Apollo traffic  light junction at Apremdo, in the Effia–Kwesimintsim Municipality.

The deceased was burnt beyond recognition, while his auntie, Maame Abena, a MOMO agent, narrowly escaped from the fire.

The Effia-Kwesimintsim Municipal Assembly (EKMA), has  established that operators of the fuel tankers which exploded and caused fire at a parking space, near the Apremdo market,  on Wednesday, have no permit to run such business at the premise.

It stressed that the operators have only been granted permits to erect temporal structures for businesses “and  not to  use the place  as a parking lot or distribution point for fuel”.

The  Municipal Chief Executive for Effia-Kwesimintsim, Kojo Acquah,  told  journalists after the fire  incident  that, the tanker operators have been running their operations at the blind side of the assembly, adding that “the trucks have not been given any permit”.

He has, however, indicated that EKMA would undertake a thorough investigation  into the accident, assuring that, the necessary actions  and  sanctions  would be applied against  persons or groups whose negligence caused the disaster.

Sources narrated that, the child was left to sleep in one of the containers which served as MOMO joint at a parking place near the Total Filling station, at Apremdo.

The inferno, which began about 1:30 pm, sent thick dark clouds, billowing into the atmosphere and caused people at the scene to run for their dear lives.

For about four hours, the raging fire swept the entire parking area and destroyed six containers used as mechanical spare-parts shop, a drinking spot, an  eatery, a MOMO joint, and an Opel taxi cab.

Reports at the scene indicated that, the fully loaded fuel tankers were parked at the parking location(yard) behind the Total Filling station, awaiting  directives  to discharge fuel at the pump stations before the explosion occurred.

Eye witnesses  spoke about  earlier efforts  of crew aboard two fire tenders, who made frantic efforts to control the raging fire from spreading to other areas including the Total Filling station while an anxious milling crowd at the scene prayed it did not affect the  nearby ‘Abenbenbobom market’ at Apremdo.

“I heard an explosion and the place was suddenly consumed by the fire. My brother, the inferno here is no joke,” an eyewitness recalled.

The  Public Relations Officer of the Western Regional Command of the Ghana Fire Service, Divisional Officer 111, Emmanuel Kojo Bonney, said six fire tenders were deployed to the scene  to control the fire, adding that “it took our team about an hour and forty-three minutes to ‘tame’ the wild fire”.

Complaining about the crowd which milled at the fire scene, he said, “In fire-fighting, every second counts so when the crowd invades the scene, we have to meander through the crowd to fight the fire…this delays our time in fighting the fire. So the police had a hectic time dispersing them.”