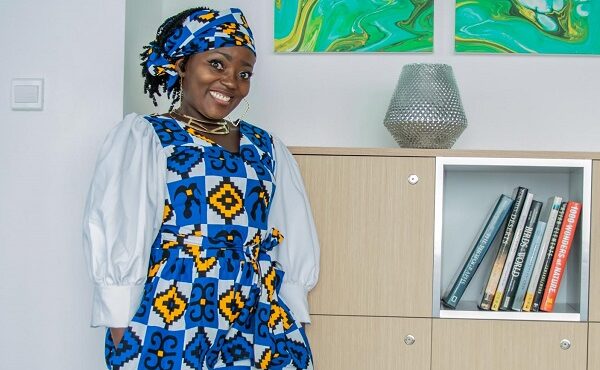 Something which started as a usual photo shoot for a portrait to be placed in the hall of their room and her album, surprisingly ended up becoming a ‘national project’.

Interestingly, the photograph meant for her private use rather became a national symbol of welcoming guests to Ghana, and some countries abroad.

To her surprise, it ended up at various places being used on  calendars, bags, dresses, gift items, among other artefacts.

Ms. Angelina Nana Akua Oduro, now 39, took the iconic photograph in 1999 at age 18, but because it was not copyrighted, she does not receive any royalties from the commercialisation of her image.

She shares her story with The Spectator newspaper.

Ms. Angelina Nana Akua Oduro whose parents hail from Obo Kwahu and Akyem Pramkese in the Eastern Region was born at North Kaneshie Dans Bar, affectionately referred to as Ga-Mantse in Accra.

Her parents are Mr. Daniel Oduro a contractor, and Madam Janet Oduro, anad was born into a family of seven for which she is the penultimate last but one born of the four women and three men.

Ms Angelina Oduro commenced her educational journey at St. Monica’s at Awudome in Accra for her basic education and continued to a government school at Awudome Two Junior High School.

Her dream to further her education at Okuapeman Senior High School in the Eastern Region was dashed due to financial problems at home, but this notwithstanding, his brother suggested a fashion school to her.

With to her love for fashion, Angelina heeded to the advice and was enrolled into a fashion school, Fashion Africa, at Swanlake by her elder brother, where she studied Modelling, Fashion Design and Embroidery.

After the school she did her attachment at Tetteh Praha Designs, where the interest in fashion grew stronger.

Touching on the genesis of the Akwaaba photo, she said, at Tetteh Praha, they attended  fashion shows, did TV commercials and this kept replaying in her head after school.

This pushed her not to renege on all the beautiful things she learnt from the fashion school.

“My mother used to send me to buy Kenkey for her and there was this photograph of a lady pouring palm wine leaning on a wall at a drinking bar around our house, due to my fashion background, I appreciated it and wanted to take a similar one,” she revealed.

According to here, she shared the story with a photographer friend who later linked her to another photographer, by name Mr.Joe Osae.

“We then went to Makola, and other places where necklaces, bangles, cloths and pots among others were sold to facilitate the photo shoot. Afterwards we went to Mr.Joe Osae at Ceejay multimedia at Lapaz,” she said.

She stated that, they took some of the photos at the studio, Osu, the beach and later selected the best ones

“The intention was to fill my album and hang it in our rooms but later other people started showing interest, so Mr.Osae told me and started selling it, and at times gave me some proceeds, even though it was not on a large scale,” Ms. Oduro stressed.

Suddenly, it was everywhere, the photograph was circulating which was something her father was not happy about considering the spiritual implication which could follow .

However, her father was later convinced about the positives for which he understood.

“There were times some friends who have travelled would inform me about where they have found my portrait, which made me excited. If I look back I feel I have marketed Ghana with my image,” she noted.

Talking about the future plans, she said “we are coming out with a documentary of my life, a clothing line and some cartoon filled with our cultural values to inculcate in the children at a tender age, because I love children.”

Ms.Angelina Oduro has called on well wishers to sponsor her to achieve these goals.

“I do fascinators, makeups and used to train models,” she added.

She has further called on authorities to recognise her contribution in marketing the country,

“Some people even thought I was dead or it was some painting, I would be glad if I am given an ambassadorial role to properly sell Ghana,” she suggested.

Ms. Oduro has appealed to Ghanaians to patronise made in Ghana products because through that, a lot of employment would be created to improve the per capita income of the citizens and boost the economy as well.

She thanked Mr. Osae, the photographer, for making her dreams come to pass.

She loves to watch documentaries and cartoons and her favourite food is Kenkey with fried fish.