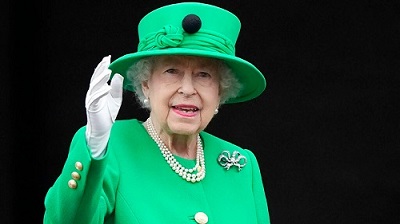 The announcement by Buckingham Palace concerning the death of Queen Elizabeth II has sent a wave of sadness across the world.

She visited Ghana on two occasions, that is, 1961 and 1999. On one occasion she was the Special Guest of Honour in Ghana in 1961 to participate in the country’s post-Presidential days after Ghana had decided to use Kwame Nkrumah as its own President. So glamorous was she that Ghanaians at the time felt very proud about the diplomatic relations between Ghana and the United Kingdom. The Queen is blessed with many children, grandchildren and great grandchildren.

In line with tradition and culture, the British will observe 12 days of mourning during which the state will declare the period as holidays in honour of the late Queen.

President Nana Addo Dankwa Akufo-Addo has, on behalf of the government and people of Ghana, expressed his condolences to the royal family and people of Britain. This is a sad moment for our British friends but the sadness is shared by all Ghanaians, the Commonwealth of Nations and the world as a whole.

The world has a lot to learn from the beautiful quality of the late Queen. Her beautiful and infectious smile was the envy of people in the world.

Again, her language of diplomacy and unique advice to the royal family as well as government officials would be missed by those who benefitted from such advice, guidance and counselling. There is no doubt that the world as a whole will miss her dearly.

The presence of the Queen at functions added special grace to all those occasions.  Many nationals of different countries felt proud and greatly honoured by her presence.

United Kingdom together with the world has lost an important personality who will be missed by the world. It is not only the UK which has lost this gem of a Queen but the entire universe of mankind.

The royal system in the United Kingdom has been preserved over the years till today, in line with British customs and traditions. This has helped to preserve the identity of that country.

This is a big lesson to all countries to emulate and preserve their values and norms in line with their own prospective practices. Again, the way in which the death of the Queen was announced is very admirable.

Members of the royal family first gathered and took a decision on the death of the Queen before allowing Buckingham Palace to make announcement of the death. This was picked by the British Broadcasting Corporation and announced to the world.

Thus everything was done in an orderly manner. What this means is that, when it comes to announcement of the passing of the royal, it cannot be done any how or in a haphazard manner, but in a well-rehearsed, smooth and meaningful manner acceptable to the people in line with customs, norms and belief systems.

This is a great lesson that we cannot ignore.

Furthermore, it is instructive to note that the news of the passing was broadcast by the national broadcaster after receiving it at the Buckingham Palace. Another lesson here is that those who serve on the national network must be fair, committed, diligent and responsible.

Anyone who wants to be respected on the national network should have accommodation for such values and principles.

After passing away at age 96, the Queen kept to certain basic principles of health. First, she doid not eat just any food but balanced diet to keep her body healthy. She took time also to rest whenever she found it necessary to do so.

Again, she took in enough water and exercised her body. She undertook all this on regular basis. No wonder, she stayed long till age 96.

The great leader is without blemish, but she would be remembered for all the good things she stood for. Having been on the throne for 70 years she played a critical role in the transformation and growth of the Commonwealth of Nations.

This seeks to bring all former British colonies together and promote their common interests. Under the Commonwealth, certain achievements were made. First of all, the Commonwealth has helped to promote peace and security not only in Commonwealth but in the world as a whole.

All these have helped to promote socio-economic development in various parts of the world. The role of the Queen in the world has also helped to bring about pleasant diplomatic relations in all parts of the world. Her personal qualities as a Queen are enviable. Her language of diplomacy and tact as well as prospect for everyone go to show that we need to build healthy relationships with one another irrespective of colour, belief, race and practices, among others.

The visit of the Queen to Ghana on two occasions portrays her as a lover of the country. In 2001, for example, she singled out Nana Addo Dankwa Akufo-Addo to propose a toast in Canada during a Commonwealth Summit in that country.

The demise of the Queen is a big blow to the world. It is expected that her successor, having followed the role she played on this earth, will also work hard to emulate the attitude and lifestyle of the late Queen who demonstrated that she was a Queen mother not only in the United Kingdom but to the world as a whole.

Countries must keep to their norms and values so that like the people in the UK, their identity as a people will be preserved and kept afresh for the present and future generations. This is how the beauty and tradition can be blended and kept together for the good of mankind on this earth.

Queen Elizabeth II would be remembered at all times because she paid her due as a world leader.

May her soul rest in perfect peace.