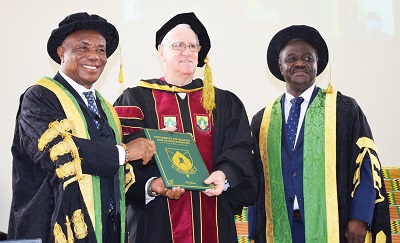 The University of Health and Allied Sciences (UHAS) in the Volta Region last Friday conferred an Honorary Doctor of Science Degree on Reverend Father Andrew Campbell, a Catholic priest, for his unflagging impact on leprosy control, health and development in Ghana.

The ceremony which coincided with the 5th Congregation of the university at the main campus at Sokode-Lokoe, near Ho, was witnessed by the Vice President, Alhaji Dr Mahamadu Bawumia and other dignitaries.

An accompanying citation described Father Campbell as “friend to the poor, brother to the needy and servant of humankind whose persistent humanitarian support for the community of lepers and street children earned him the affectionate title, the leper priest.”

Born in Ireland in 1946 and ordained in 1970, Rev Father Campbell sailed to the Tema port on October 13, 1971, to work as a missionary priest in the Society of the Divine Word in Ghana.

He received his Ghanaian citizenship on July 3, 2013.

“Over the years, you have taken an active interest in the plight of the poor and needy, particularly cured lepers.

“Your public displays of solidarity have been about rehabilitating Ghana’s lepers and breaking down the prejudice that makes outcasts of them,” the citation noted.

It acknowledged Father Campbell’s valiant role in championing the rights of lepers within his parish, often inviting them to church services where they were given the place of honour.

The citation again read in part: Your tireless efforts have been based on your belief that improvements can be made in the lives of the poor and needy not only through state subsidy but also through charitable donations and fund raising.

It lauded Father Campbell for several initiatives, including a mill at the leprosarium in Accra and other places in Ghana; a soap making venture, mat making, poultry farms and dress making for those who still have fingers, aimed at equipping cured lepers with skills that allow them to be self-sufficient.

“As a result of your lobbying, church initiatives and government policies are beginning to handle the plight of lepers in a more compassionate manner,” the citation further said.

Father Campbell who received the degree with great joy thanked UHAS for the great honour and said that “if you want to be happy, make someone happy.”

Father Campbell, the founder of Lepers’ Aid Committee, a group of young people determined to assist in curing lepers by raising funds, is a founding member and co-chairman also of Environmental Protection Association, West Arena, Accra, an NGO with the aim of keeping the surroundings clean.