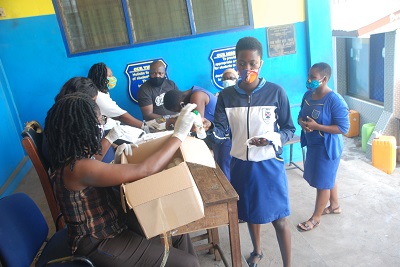 Final year Senior High School (SHS) students have started returning to school in various parts of the country to enable them commence with their academic work.

The students who are mostly in their final year will also be preparing for the final West Africa Senior School Certificate Examination (WASSCE).

A visit by the Ghanaian Times to some of the schools in Accra revealed that a sizeable number of students had returned to school.

In line with the measures as outlined by the President, Nana Addo Dankwa Akufo-Addo the schools have also taken delivery of quantities of Personal Protective Equipment (PPE).

At the Accra Wesley Girls Senior High School in Kaneshie, students were seen receiving their masks and sanitisers and this was after they had been screened with an infrared thermometer, commonly known as thermometer gun.

A source who spoke to the Ghanaian Times said most students had returned to school and had been divided into a group of 25 each for the classes to commence on Tuesday.

At Accra Academy, the situation was the same as majority of students had returned and waiting for classes to commence today.

A manual on safety protocols prepared by the school had been shared to students who had reported.

As at the time of our visit, most of the students who had been supplied with their hygiene frills had closed from classes.

The Assistant Headmaster of KATECO explained that, because the students had stayed home for a while without effective teaching and learning, they had been advised to put in more effort in their studies in the six weeks’ period.

He added that, students were educated on the safety protocols on COVID-19, something he mentioned would continue until the students’ complete school.

A number of parents who spoke to the paper expressed confidence in the arrangement made by the school authorities regarding protocols on the COVID-19, and underscored that the return of students to school was very important.

Madam Cecelia Annor, a parent of a Gold track student at Accra Academy said, she was “glad students were going back to school”.

She further stated that, not all the students studied while home, so the six weeks would be helpful in their preparation to the 2020 WASCCE.

Meanwhile, students who had returned to school went about their activities without showing any signs of fear or panic.

Some students we spoke to told us that, they were ready for the exams and very optimistic of excelling.

From Koforidua, AMA TEKYIWAA AMPADU AGYEMAN reports that, schools in the Eastern Region reopened amidst strict adherence to safety protocols to prevent the spread of the coronavirus disease.

It was observed by the paper that, Veronica buckets had been placed at vantage points at the entrance of the schools.

Students and teachers were also seen washing their hands and wearing nose masks while they were screened and their contacts taken before they were allowed to enter.

Speaking to the Eastern Regional Director of Education, Mrs Margaret Nsiah Asamoah said her outfit has received some PPEs from the government.

She said the items included Veronica buckets, thermometer guns, tissues, soaps among others, adding that the items would be shared to all schools in Koforidua.

FROM THE UPPER WEST REGION, LYDIA DARLINGTON FORDJOUR, reports that, students had started trickling into the various schools on the first day of reopening.

Checks by the Ghanaian Times at some SHS in the region showed that most teaching and non-teaching staff were already at post, awaiting the arrival of the students.

At the WA Senior High/Technical School, almost every staff had reported and was receiving their nose masks as well as bottles of hand sanitiser each from the school’s administration.

The headmaster for the school, Mr Ismail Salih told the paper that the school had received hand washing items as well as gun thermometers and PPEs from the education directorate in the region on Saturday.

Touching on isolation centres, Mr Salih said the school was still preparing a sick bay but had designated a dormitory to serve the purpose for the time being and encouraged parents to let their wards report to school.

At the Wa Senior High School, four Veronica buckets had been mounted at vantage points of the school while students who had reported were undergoing screening with an infrared thermometer before they were allowed entry into the school’s premises.

Checks at the Tupaso Senior High School, a private institution at WA revealed that few students had reported, although classes had been scheduled to commence today.

Handwashing facilities had been mounted at the entrance and other vantage points on the school compound.

In an interview with the Ghanaian Times, the Regional Director of Education, Mr Godfrey Gongyeru stated that the schools were ready to commence academic work, latest by Wednesday, irrespective of the CODVID-19 pandemic.

He assured parents that the school authorities and staff would endeavour to safeguard the wellbeing of the students.