Former President Kufuor explains why he took Ghana to HIPC 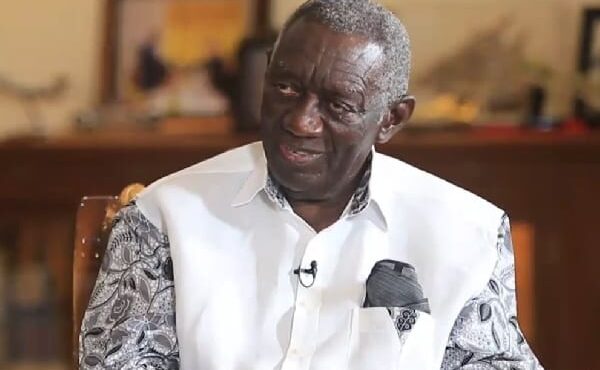 Ghana in 2001 under the presidency of John Agyekum Kufuor, was declared a Heavily Indebted Poor Country, HIPC, by the World Bank.

According to the President, creditors were not looking at Ghana because of the debt his predecessor had left behind so, there was no benefit and the macro-economy was in “shambles”.

This is because the previous government had preached a very ‘bloomsome’ picture to depict that all was well, so, Ghana was too proud to admit its indebtedness.

President Kufuor told KSM on ‘The KSM’ show that prior to winning the 2000 election, his government had promised to do a lot for Ghana to grow economically but things were different when he was sworn in on January 7, 2001.

“Through the campaign of becoming President, we had promised a lot. We talked about going to usher in the golden age of business, and what we will do to turn around the economy etc; we go in there and found empty coffers; not just empty coffers, piles and piles of loans, indebtedness. The nation was practically insolvent. Even the fuel stations had long queues of vehicles because there was no petrol to sell.

“Nigeria had blacklisted Ghana because Ghana owed them some supplies; so, they cut us off. We had to rush to Nigeria and beg the president of Nigeria, Olusegun Obasanjo. This was a state thing and I had to get my government and economy working.

“I went there to plead. At the presidency, Obasanjo had assembled his entire cabinet and asked me why I am in their country, so, I told him that I am here to plead so that you restore supplies to Ghana. The place was quiet, the President raised his head back and said, ‘well, our policy is not to continue supplying people who do not pay, so that is why we are not supplying Ghana’.

“I told him that mine was a new government and we needed to have a fresh start and I assured them that when they supply, my government will do everything with its power to pay. Then Obasanjo said, I had to give a written undertaken that when they supply Ghana I will pay. Something hit me at that point, I sensed the mood was softening a bit so I said Mr President if that is the only thing you want, then please give me pen and paper to write to you that when you supply us, we will pay. He burst into laughter; he then said he will give Ghana 30,000 barrels of crude a day for 90 days on credit…true to his word, for the entire eight-year period of my government, the suppliers came [constantly],” President Kufuor said.

He recounted an international conference in Bamako, the capital of Mali, where he had attended on an invitation and met so many dignitaries including the Director of IMF, President of the World Bank and the Secretary of State for International Development of the UK, Clair Short.

President Kufuor said, during the break, he was “cornered” by these dignitaries and somehow, they wanted to get his thoughts on so many issues especially, the policies he had come to power with because he was a new “boy” on the bloc.

He noted that it took the lady, Clair Short to tell me that “look, everybody knows the state of Ghana’s economy, if you tell the truth about the economy then you will get the help you want [because] we know that you are HIPC so, if you will avail yourself to an IMF programme, then you may get the reliefs you want.

“So, that registered with me; the IMF Director then said, if I take the step, he will work with us so, that we come out of the indebtedness. The previous regime had got us there but pride could not make us admit that we are indebted and because of that inflation was over 40%…the cedi against the dollar was high…so, it was impossible for us to move with all the plans we came to office with…

“These three people wanted me to consider that the situation was messy, so, I should own up. I came back to Ghana, assembled my team and told them that nobody want to hear HIPC so, we should find an alternative to HIPC but nothing clicked…I tasked the Finance Minister to go and inform Parliament that we have decided to go to HIPC…truly Britain was the first country to give us a relief of 50 million pounds to service our loans; other countries followed,” he stressed.

President Kufuor noted that he felt fulfilled to have attended the Mali conference which became of great help to Ghana.

He said when Ghana’s debt was cancelled, he decided to write on projects that he constructed after the ‘benefit of HIPC’ – something Ghanaians mocked him for.