Former President Mahama to unveil policies ahead of manifesto launch 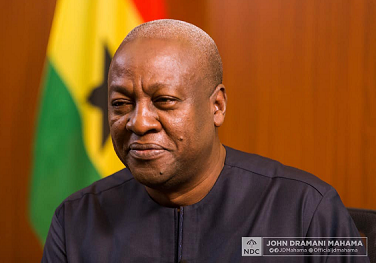 Former president John Dramani Mahama will in the coming days announce some far-reaching policies as part of his message to the electorate for the December polls, the National Democratic Congress (NDC) has hinted.

According to the party, consistent with their ideology, the policies would be implemented to the letter should the party emerge victorious in the December polls.

At a media conference addressed by the party’s Communications Officer, Sammy Gyamfi, in Accra yesterday, the NDC said the policy announcement would be ahead of the out-dooring of the party’s manifesto in August.

“The flagbearer and leader of the NDC will in the coming days announce some big-ticket policies which are central to his transformational vision for this country.

“This announcement will include a major and comprehensive job creation policy he intends to undertake to create millions and permanent dignifying jobs for the teeming unemployed youth when he assumes the reins of power in 2021.

“Not only are we going to announce a policy but we will give you the breakdown and how we will achieve that when given the mandate,” Mr Gyamfi said.

The 2020 general elections, he said was a referendum on the performance of President Akufo-Addo who has “failed woefully to deliver on his numerous campaign promises having fulfilled only 14 per cent of his 631 manifesto promises they made to the Ghanaian people in 2016.”

The NDC asserted that the next John Mahama-led government would restore the lost confidence.

“Even though there has been and continue to be hopelessness, lawlessness, and absolute impunity under the vindictive and non-performing Akufo-Addo government, there is hope for a better inclusive and prosperous Ghana.

“This hope is anchored on the return of the visionary, trustworthy and humble John Dramani Mahama to the Jubilee House on January 7, 2021 to rescue our beloved country from the hands of the vindictive, corrupt and nepotistic Akufo-Addo government and to restore the nation back to the path of true progress and development.

“His Excellency John Dramani Mahama is committed to fixing the mess that has been created by the maladministration of President Akufo-Addo in all sectors of the nation and in all facets of our lives,” Mr Gyamfi said.

Enumerating some of the policies Mr Mahama would introduce to alleviate the suffering of the people ahead of the ‘big announcement’, Sammy Gyamfi said unlike the current government, the former president was a tried a tested person when it came to the fulfilment of electoral campaign promises.

Some of the policies he said would include free technical and vocational education from the second cycle to the tertiary level, the institution of a national apprenticeship programme and the provision of health infrastructure in all regions and districts which don’t have regional and district hospitals respectively.