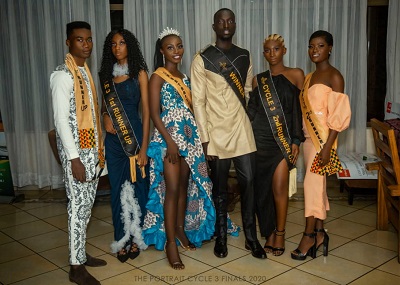 The grand finale of The Portrait  Reality Show, an annual fashion show organised by Exquisite Modelling Empire, came off last Saturday at Coconut Grove Regency in Accra with 26-year-old Francis Quarshie taking home the ultimate prize of US$ 1,000.

His closest competitors were Keziah Aboumey and Delali Agor who also won US$ 300.00 and US$ 200.00 respectively as first and second runners up.

The event which was climaxed by “The Exquisite Runway”brought together hundreds of fashion enthusiasts and local designers.

According to him, it was to also pave way for the fashion designers to introduce their brand to a larger audience as they strove to increase their client base through event marketing platforms.

Expressing satisfaction at the outcome of the event, the CEO who is also the producer of the show said the finalists emerged after a rigorous selection process and that there would be more enthralling editions in the years ahead.

Mr Francis Quarshie, an Offshore Safety Officer, took up modelling as a part time role. He said he would continue to aspire for bigger laurels despite winning the The Portrait Reality Show.