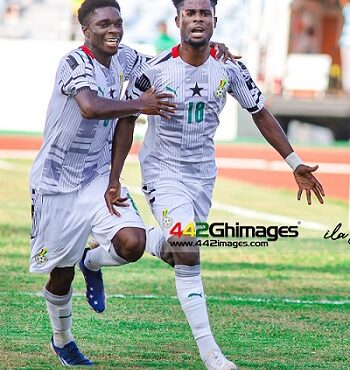 The Black Galaxies of Ghana will square off with the CHAN Eagles of Nigeria in Abuja today for the final round second leg qualifier of next year’s Championship of African Nations (CHAN) in Algeria.

With a foot already in the championship, following an impressive 2-0 win over the Nigerians last Sunday, the Galaxies would be determined to replicate a similar performance and walk away with at least a draw.

Second half goals from Daniel Afriyie-Barnieh and Suraj Seidu ensured that the Galaxies travel to Nigeria with an advantage from the first leg.

The result, thus, presents a very tough task for the CHAN Eagles who would have to score three unanswered goals to qualify ahead of the Ghanaians.

But with the Black Galaxies poised to make a return to the CHAN after a long absence, they would go all out to protect their advantage and possibly return with a double over their neighbours.

Skipper Gladson Awako, Daniel Afriyie Barnieh, David Abagna, Mohammed Alhassan and Umar Bashiru had been a delight to watch in the qualifiers so far and would be in the tick of affairs to reward themselves with the CHAN qualification after their splendid efforts.

Coach Annor Walker has expressed huge confidence in his squad and confident that his charges would deliver another great performance in Nigeria.

The embittered Nigerians, however, will definitely give the Ghanaians a good run for their money as they hope to overturn the results in their favour.

Playing in front of the large Abuja fans, the CHAN Eagles would be inspired to fly high over the Galaxies – and the turn the situation around.

The team had already moved on from their uninspiring performance in the first leg in Cape Coast and is determined to go all out for a win in Abuja.

Just like they attempted in Ghana, the Nigerians, who appeared more physical, would set up to bully and frustrate the Galaxies to succumb to defeat.

Whilst they hope to score, the Eagles would be eager to protect their goal-line, aware that any goal from Ghana could be disastrous as far as their reputation and future in the CHAN tournament is concerned.

Do not forget Ghana eliminated the Super Eagles of Nigeria in the Qatar World Cup this year and another slump would be seen as a calamity. But should the Galaxies care?

Indeed, today’s game should be a fiercely contested one as both teams have expressed their eagerness to grab the only ticket available for CHAN next year.

Whilst Nigerian fans would wait for a victory to celebrate, supporters in Ghana should be preparing to receive the Galaxies back to the country with a hero’s welcome.