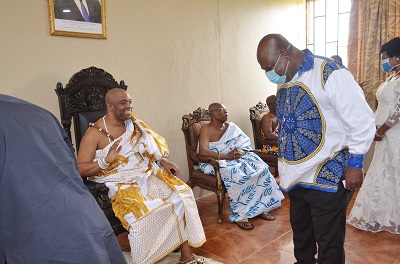 There was heavy security presence at the Ga Mantse Palace yesterday when the Greater Accra Regional Minister; Mr Ishmael Ashitey led a team of state officials to pay a courtesy call on the newly installed Ga Mantse, KingDrNiiTackieTeikoTsuru.

Armed to the teeth, the security personnel mostly made up of operatives from national security and the Ghana Police Service were to ensure law and order at the palace.

They wereconspicuously positioned at the entrance and back of the palace, in readiness to combat any group that might try to destroy the beauty of the occasion.

DrNiiTackieTeikoTsuruwas formerly introduced by the Ga Traditional Council as the new Ga Mantseon May 10, 2020 after having undergone the customary purification rites at the Nungua, GborbuWulomlo’s Shrine.

Addressing Metropolitan, Municipal and District Chief Executives (MMDCEs) who were led by the Regional Minister, King DrNiiTackieTeikoTsuru appealed to the MMDCEsto rally behind him to ensure a united front.

He explained that the disunity among elders of the land was hindering the development of the Ga community who were dwelling in poverty and distress.

King DrNiiTackieTeikoTsurusaid, the Ga State was underdeveloped following the absence of the Ga Mantse, and that the only way to address the situation was when elders of the land see unity as a solution to their problems.

He called on factions within the Ga state to use laws governing the country and that of theGa Traditional Council to resolve their grievances.

Mr Ashitey who presented assorted drinks to the Palace ahead the celebrations of the Homowo, the annual Ga traditional festivity, asked commercial entities including those in the financial sector to support the Ministry to rehabilitate the Ga Palace and the Ga Traditional Council Offices.

“Because of the numerous quarrels they have had over the years, the buildings had become deteriorated, and therefore it’s up to the commercial entities in the region to assist to renovate the building for occupancy,” he said

Mr Ashitey called on the King DrNiiTackieTeikoTsuru and the Ga Traditional Council to do everything possible to ensure peace and unity between the Ga State.

Meanwhile, a faction led by the Ga Dzaasetse, NiiOto-Ga II has denounced the installation of DrTackieTeikoTsuru as the Ga Mantse.

A statement issued to the press on May 14 2020, said King TackieAdamaLatse II, remained the only Ga Mantse.

“King TackieAdamaLatse II ,  was nominated, elected and enstooled Ga Mantse to succeed the late BoniNiiAmugi II in accordance with customs, traditions, conventions and usages of the Ga State in 2011” the  statement said.