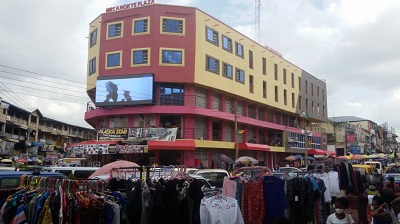 Kumasi, once the Garden City of Ghana, is now the city of stores.

Stores continue to spring up at any available spaces and corners of the metropolis either by the Metropolitan Assembly, a private contractor or individuals, or some prominent citizens some of whom do not have building permits.

Old buildings at Adum, the hub of business, and Dr Mensah, among other areas are being developed into three, four and five storey building, all in the name of stores.

The development is so intense that even school compounds are being turned into stores as in the case of Asem Boys’ School, in Kumasi.

It would interest one the more to know that the Subin drainage, which stretches through the Railway Corporation at Kejetia, has stores constructed on it.

The fact is, there is no provision of toilet or urinal facilities in these stores which has resulted in the store owners using the already choked gutters by the streets as the dumping ground of urine and other faecal matter.

Almost all the stores at Adum, the hub of business, do not have a place of convenience and the store owners use the gutters thus making it unpleasant walking through the streets especially on a sunny day, as one is greeted by the pungent smell emitted from them.

It is a common sight to see most women displaying cooked food (rice, yam, red red, etc) by the gutters and this poses a serious health danger or hazard to consumers.

Majority of the fast food sellers also come to the edge of these gutters to do business without the slightest knowledge of any health implications.

But, health experts say there is a serious health implication when one is exposed to pungent odour emitting from the gutters or elsewhere.

According to a former Kumasi Metropolitan Health Services Director, Dr Kwasi Yeboah-Awudzi, “people who are staying near offensive smell almost all the time can be potentially at risk of having nausea, headaches, depression, increased anxiety, elevated blood pressure, decrease in physical energy, asthma attacks in asthmatic patients as well as physical discomfort (aches and pains)”.

Pregnant women are mostly at risk of contracting other infectious diseases like dysentery, typhoid, cholera among others when exposed to such smelly environment.

Dr Yeboah-Awudzi, therefore, urged pregnant women, the elderly and people with chronic health problems like asthma, not to be exposed to such odour as it would have negative health impact on them.

Surprisingly, the Kumasi Metropolitan Assembly has no specific bye-laws which mandate store owners or occupants to provide toilet facilities thus making the developers have a field day.

The Engineer said the Assembly was rolling out a project to change the phase of the metropolis and as part of the project, there would be first class public place of convenience at vintage areas where stores have sprung up to avoid the use of gutters as dumping ground.

He pointed out that the proposed project would ensure that private contractors submit a detailed plan with the provision of toilet and urinal facilities to the Assembly before any construction could take place.

He assured that KMA would ensure all newly constructed stores at Adum and parts of the central business areas would have toilet facilities to ensure comfortability.

He said that it was the duty of the Assembly’s health directorate to enforce the bye- laws that expect building owners and occupants to provide toilet facilities.