Getting ready for domestic football 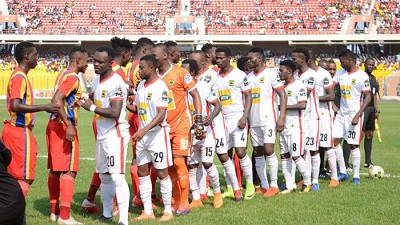 There is something in the air. There is football in the skies. It is domestic football.

In the next few days, starting specifically on November 13, next week, local football will gush out from the feet of more than 180 players across the fields – all-too ready to feed an intensely starved local football contingent.

As you may have been aware, the government placed a ban on domestic football in March, this year, in the heat of the COVID-19 fatal outbreak – ultimately leading to the cancellation of the 2019/2020 season.

Ghanaians were utterly disappointed that their football had been frozen, but they had absolutely no choice.  There was only a Hobson’s choice.

As a matter of fact, the Premier League was at the Match-Week 15 stage when it was suspended. All other national football competitions, including the men’s FA Cup, women’s Premier League and FA Cup competitions, second tier and third tier championships all similarly came to a halt.

Heartily, after seven prickly months in the ‘Covid-doldrums,’ the government on September 20 lifted the ban on contact sports including football, paving way for return of the Ghana Premier League (GPL).

As a safety measure, we were told fans were not going to be allowed to attend training sessions of their pet clubs. So far, that directive has been rudely flouted as fans have stormed club’s training grounds in their good numbers with government looking on, totally befuddled.

Per the directive, too, the stadia will be open to fans when the top flight commences, but only up to 25 per cent of a facility’s capacity. It would really be interesting to see how that order is stuck when it comes to the ‘Himalayan’ clash between sworn rivals – Asante Kotoko and Hearts of Oak.

These are issues that we ought to be profoundly concerned about as the league resumes next week; for we as a nation, cannot afford to roll back the clock of progress chalked in the fight against Covid-19. Truth is that, we are still in the woods and must not play games with the fatal epidemic that has claimed tens of thousands of lives across the world.

Having said that, it is admirable how the Ghana Football Association (GFA) has worked towards the resumption of the domestic game.

We have seen a lot of measures put in place by the FA including the COVID-19 testing of players and technical teams of Premier League clubs that started last week. Indeed, the testing of players and officials – a coalition between the GFA and the Government Covid-19 Task Force, according to the FA, is part of efforts being made to ensure that football is played in the safest possible way.

Delectably, we have also seen some refresher courses organised by the FA for the ‘Knights of the Whistle’ and workshop for Match Commissioners, venue media officers among others.

Speaking at one of its workshops, FA General Secretary, Prosper Harrison Addo, said the work of Match Commissioners was very important to the success of the competitions, hammering profusely on integrity of the game.

That is the way to go.

Perhaps, the most alluring news for the Premier League ahead of the start was the capture of Ghana international Asamoah Gyan by Legon Cities, after signing a one-year contract. Truth is, Gyan – Africa’s top-most scorer in World Cup history, has added a lot of glamour to the premiership.

It is widely reported that he will pocket US$1million over the next four years with his annual returns standing at U$250,000. That is as attention-grabbing as motivating to the nation’s domestic football.

We cannot wait to see him in his famous No. 3 shirt!