Ghana Black Stars’ call-up… Can we ever bridge gap between local, foreign-based? 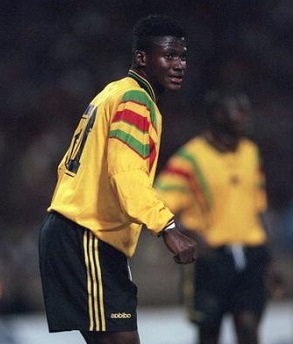 Would the home-based players ever enjoy their moments in the senior national team, Black Stars, as they used to do in the 80s and the 90s? This is one question that has been dangling on the lips of local fans for some time now.

Getting a decent number of the so-called locals in the Black Stars, is one of the most contentious issues in Ghanaian football circles – and has over the years generated a gamut of controversy.

In West Africa, especially, the senior national teams are fully dominated by players who ply their trade outside of the country, especially in Europe.

Painfully or frustratingly somehow, this has come to stay. Question: Is it the right way to go?

Indeed, as far back as the 1990s, there was a strong agitation from the public; in fact, supporters virtually badgered on the FA at the time to include local players in the national team. Their contention was that some of the locals were streets ahead of their foreign counterparts.

The issue was even raised at one of the FA Congresses after which the FA decided to give about a 40 per cent slot to the locals, whilst their foreign colleagues had 60 per cent of the composition. This was evidenced at the 1992 African Cup of Nations tournament where the Black Stars paraded not less than nine home-based players.

But do not forget, too, that those were the halcyon days where we had some marquee names at the local scene – who week-in, week-out were attracting the crowd to the stadia with feet that tantalizingly drew gorgeous patterns on the pitch.

Today, let us be honest with ourselves, how many locally-based materials do we have that can fiercely challenge the overseas-based players for their shirts? How many players out there in the league are gorgeously attractive enough to pull many to the stadium? Truth is that a good number of fans go to the stadium today not really because they are going to watch a superlative, swash-buckling performance from the locals, but attend games because of the emotional attachment to their clubs.

Sadly, even in situations where we are fortunate to have one or two dazzling performers in the local league, they jump to the next available ‘exodus bandwagon’ to seek greener pastures elsewhere – making it easy for the GFA or the national team coach to rely on the foreign legion, which are their preferred choice, anyway.

Evidently, it is against this backdrop that the Confederation of African Football (CAF) in their own wisdom decided to introduce the Championship of African Nations (CHAN) tournament for the home-domiciled players, at least to encourage them to stay around and give the local league some thrill and excitement.

Indeed, there has been a whole lot of hullabaloo with regard to players who had recently switched nationality to play for the Black Stars. Personally, one does not see anything wrong about it. Question: Are they Ghanaians, yes! Are we looking to take a formidably winsome team to the World Cup in Qatar? Yes! Do we dream to go beyond quarter final in Qatar? Yes! So, what are we saying?

Though we qualified for Qatar, we must be honest enough to accept the fact that we do not have a very strong team, especially as regards our attacking unit and there is absolutely nothing wrong or unfair if that department is augmented? It is the reason many were thrilled that the football authorities were able to convince Inaki Williams, especially, to play for nation.

Some have argued that it is not fair for players, who did not take part in Ghana’s qualification journey, to shove off the main actors and make the Qatar cut. Well, there may be nothing to do about it. The world itself is unfair! Can we say all the players who qualified the Black Stars to their first World Cup in Germany 2006 – and the subsequent ones, got the opportunity to be in those tournaments.

See, we shall be the first people to condemn the FA if we go to the World Cup in Qatar with a ramshacle team and get flushed out in the very first round. We should not be sentimental about it, at all. Certainly, knowing the repercussions of what an early exit would mean to them, the FA may have decided to fall on those players to switch nationality.

Let us not forget that we are in a very tight group with Uruguay, South Korea and Portugal – and we need tested players for the Himalayan battles ahead.

The GFA may have to revisit its policy where a few slots of the local contingent would have a place in the Black Stars. So, in this vein, the FA Technical Team will be tasked to select, let us say the Most Potent Striker, Best Defender, Best Midfielder and Best Goalkeeper in the league to either fight for a place or be given an automatic choice.

It must be hammered home that sometimes, the kind of players we see in the Black Stars leaves much to be desired – and it is the reason many people think that the locals must be offered a slot.