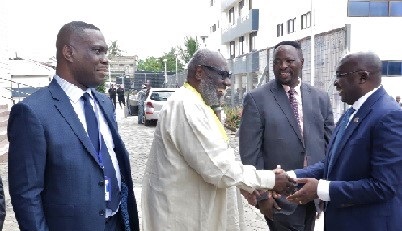 Five hundred and thirty-three people on the Controller and Accountant-Generals Department (CAGD) payroll database have been found to have multiple identities.

In addition, 148,060 out of the about 601,000 employees on the database did not match any of the names on the national identification register, the Ghana Card database.

The Vice-President, Dr Mahamudu Bawumia, who made this known, said that was the outcome of the first phase of an exercise completed by the CAGD last week.

The three-day conference, which is being attended by internal auditors from across the country, is on the theme: “Injecting fiscal discipline into resource mobilisation and utilisation for sustainable development: The role of internal auditors.”

“We were matching employees on the CAGD database with the Ghana Card ID and they completed the first phase last week. In all of cases of multiple identities, the employees have more than one CAGD’s accounts, with different employee numbers,” Dr Bawumia said.

“We are going to triangulate by checking from the Social Security and National Insurance Trust (SSNIT) biometric database to see how we can match all of these,” he added.

“It is also possible that some of those without these matching biometrics could also have multiple employee accounts, but we have to see. I have heard of ‘ghost’ workers, I have never heard of ghosts who are twins or triplets,” Dr Bawumia said.

In that regard, he said, all public institutions had been directed to submit headcount copies of their monthly salary validation report to the IAA and the CAGD by the 15th day of every month for validation.

He said the IAA would, in turn, follow up on those reports and authenticate the existence of the staff and connect their productivity to the remuneration being paid by the government.

Through that, the Vice-President explained, the government was taking steps to save a lot of money from ‘ghost’ names and pursue those who did not work but got paid.

These and other strategic measures adopted by the government, he said, were to ensure fiscal discipline in the financial systems of the country and anchor economic sustainability.

As part of revenue mobilisation efforts, the Vice-President said the government was embarking on key reforms, including widening the tax net to increase tax revenue.

“The holistic digitalisation of the public sector service delivery of key institutions, as well as working to develop an audit information management system for internal auditors across the country, is a measure to seal loopholes, prevent corruption and enhance value for money in public spending,” he said.

Touching on the role of internal auditors, Vice-President Bawumia said their preventive role across the public sector had enhanced fiscal discipline and saved the nation millions of cedis.

He said by their advice and vigilance, public sector waste and abuses had been minimised, while annual infractions reported by the Auditor-General had seen some level of decline between 2019 and 2020.

Going forward, he said, all internal auditors would be brought under the management, administrative and technical control and supervision of the new Internal Audit Service (IAS).

“The bill to establish the IAS has been developed and will be considered by Parliament soon. If we are able to resource internal auditors well, external auditors will have nothing or less to report on.

“So if I were the head of any government entity, I would err on the side of caution and apply the preventive approach to corruption by resourcing internal auditors to enable them to give of their best,” Vice-President Bawumia pointed out.

The Director-General of the IAA, Dr Eric Oduro Osae, said the IAA, working through its internal auditors, had ensured that payroll fraud, ‘ghost’ names, unnecessary expenditure and waste in the public sector payroll were being reduced gradually.

To that end, he said, the IAA was collaborating with the CAGD, under the umbrella of the Ministry of Finance, to clean up the payroll on a monthly basis.

Dr Osae commended the government for allocating an office to the agency.

He said the passage of the Internal Audit Service Bill would bring all internal auditors under a single unit to properly position the agency to fight corruption.

He appealed for the rationalisation of the salaries of internal auditors, particularly those with metropolitan, municipal and district assembles (MMDAs), adding that if the government wanted to fight corruption, it must resource internal auditors.

The Chairperson for the conference, Prof. Olivia A.T. Frimpong Kwapong, stressed the need to inculcate moral values in both adults and the younger generation in relation to money.

“If we are able to contain that and are content to live within our means, we can be sure of fiscal discipline among all stakeholders for sustainable development,” she said.