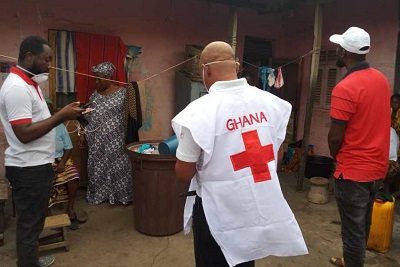 The Ghana Red Cross Society has initiated a number of activities and supported the health sector in its efforts to combat the COVID-19 pandemic.

In spite of the crucial role it plays, the organisation continues to rely on the benevolence of individuals and organisations to execute many of its programmes in the country.

Officials indicate that funding and logistic constraints, to a large extent, have been preventing the society from reaching out to the vulnerable during crucial moments.

The Greater Accra regional office, for instance, has only one pickup vehicle for its routine operations.

Madam Catherine Adasu, the Regional Manageress, who confirmed this in an interview with The Spectator said that there was the need to close the “funding and logistic gap” so that the society could do more for the nation.

She said that officers at the regional office sometimes had to offer their personal vehicles to complement the only available pickup in order to carry out field work satisfactorily.

“We are handicapped in so many ways. The little resources we have are used to encourage volunteers and settle other administrative costs. As much as we want to do more, we are not able to do so for lack of funds until we get help.

“Our headquarters is equally handicapped when it comes to funding to implement some strategic programmes,” she noted.

According to her, Red Cross volunteers were not considered frontline workers although they had, in the last eight months, supported risk communication and other activities meant to combat COVID-19.

She said that the society, since January this year, had engaged in sensitisation at bus terminals and other public places following the outbreak of the disease.

“We have set up hand washing points at public places and intensified community education on safety protocols in all the regions.

“During the lockdown we partnered Nestle Ghana to distribute items to about 50 000 households in Accra and Kumasi. About 500 volunteers are still on the field educating the public and engaging  community leaders in other areas where hand washing centres can be established,” she explained.

Highlighting other support services, Madam Adasu said that the Ghana Red Cross had distributed Personal Protective Equipment (PPE) to hospitals and schools across the country with support from different organisations including Master Card and the International Federation for the Red Cross.

The Regional Manageress further explained that the society was in the process of identifying and supporting persons who had lost their jobs due to the impact of the pandemic, adding that five markets had been earmarked to get mechanised boreholes to help improve on access to potable water.

“We need people to provide used clothing and other useful items which we can in turn give out to vulnerable people to improve their lives.

“If volunteers can receive similar packages given to other frontline workers or be put on monthly allowances by government this would be very useful as well,” she added.

Touching on other aspects of their work, she noted that suspension of sporting activities and closure of schools had halted part of their activities.

Madam Adasu appealed for more government support and called for a review of the Red Cross Act which had for the past years not been amended.

The Ghana Red Cross Society was established by an Act of Parliament (ACT 10 1958) and the Geneva Convention to, among other things, deliver relief and humanitarian services to the vulnerable during disasters and emergiencies.