Ghana: Why this embarrassment? 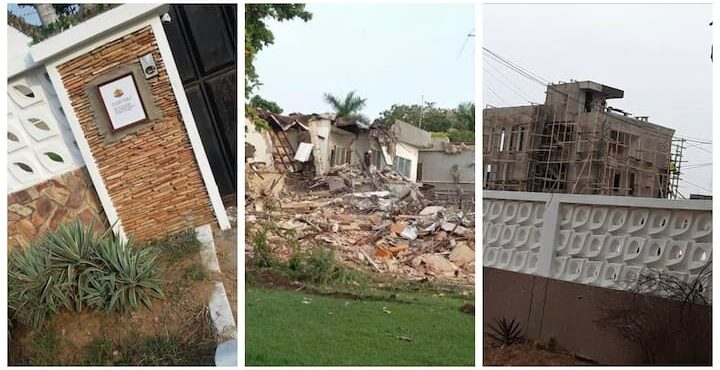 Many Ghanaians now believe that Ghana’s ‘golden-name’ has been regrettably recorded among ‘the jungle-of-states’ where ‘human-animals’ do what they like.

The reason? They have expressed amazement and fury upon the incessant media reports clearly indicating that the Bulgarian Embassy in Accra has been illegally demolished by ‘a very powerful ‘ private developer in broad-day-light.

And disturbingly, some Ghanaians contend that even with all the coercive powers of the state, the person who demolished the Embassy in Accra has neither been arrested nor prosecuted since the illegal act was committed in 2017.

Readers, the Bulgarian Embassy insists that it has valid documents confirming its entiltlement to the property in contention.

A retired Ghanaian Diplomat says:”What makes the situation very sad and beyond ‘reasonable comprehension’ is the apparent solace the Bulgarian Embassy is seeking from the Minority Caucus in Parliament; having seemingly lost confidence in the Republic of Ghana in abiding by the Vienna Convention.”

The Vienna Convention on diplomatic relations affirms the inviolability of the premises of missions.

Readers, eye-witnesses confirm that in place of the demolished embassy building is an emerging huge commercial edifice.

Media reports allege that just this week, Government’s STOP WORK order splashed on the walls of the emerging and imposing building were quickly ripped off by the private developer as he brazenly continued working on the new building.

Ghana’s Foreign Ministry , however, says “Government has distanced itself from the demolition of the Bulgarian embassy.”

According to the  Deputy Minister of  Foreign Affairs and Regional Integration , Mr Kwaku Ampratwum-Sarpong, “government has no hand in whatever the developer is doing.”

Explaining, Mr Ampratwum-Sarpong said, the Bulgarian embassy leased the property from its rightful owner on 1st February 1979 and extended it in 1983 for 50 years, thus, the lease expires in 2033.

According to the Foreign Ministry, upon the demise of the landlord , “the administrator of the estate attempted to forcefully repossess the property, notwithstanding the latter’s full payment for the lease to the late landlord.”

The Deputy Foreign Affairs Minister further explained that, “the administrator of the estate of the late landlord went to the High Court with a writ for declaration of title to the property, housing the Bulgarian embassy.

“And eventually when the case travelled to the Supreme Court, it affirmed the right of the Bulgarian embassy to the leased property.

“And notwithstanding the judgement of the Supreme Court, the successor of the late landlord sold the leased property to a private developer, who later encroached on the property.”

Meanwhile, the Minister of Lands has appointed a retired High Court Judge, Justice Kwasi Anto Ofori-Atta as sole inquirer into the circumstances leading to the encroachment and demolition of the property on the land being used by the Bulgarian embassy.

According to Mr Samuel Abu Jinapor, Minister of Lands, the sole inquirer has seven days to present his findings on the Bulgarian embassy’s issues and one month to present his report on land matters affecting other diplomatic missions in the country.

However, in a diplomatic language, the Bulgarian Ambassador to Ghana, Yanko Yordanov says;”talks are ongoing between leaders of Ghana and Bulgaria to facilitate the restoration of the demolished Bulgarian embassy building.

“Engagements include, to reinstate the legal rights of Bulgaria as the owner of the land on which the embassy was sited, in accordance with the Vienna Convention on diplomatic relations.”

A statement issued by the Bulgarian Ambassador last Thursday emphasised that, “until the lease agreement expires in 2033, Bulgaria reserves the right to own the property as ruled by the Supreme Court.”

Readers, from the foregoing, the question on the lips of many wondering Ghanaians is: Who is this private developer who seems to be more powerful than the President and the STATE of Ghana?

And the other question is: Does Ghana deserve such embarrassment in our current democratic experiment?