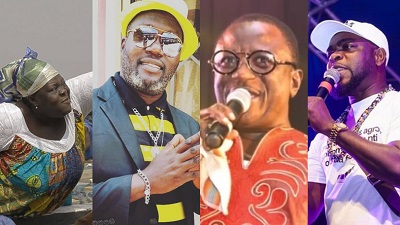 Even though death is inevitable, the passing of show business stars this year rocked everyone.

Here are seven (7) Ghanaian celebrities we have lost in 2020 so far.

The highlife musician passed away on February 2, 2020. The “MMobrowa” hitmaker suffered a heart attack prior to his performance at a concert in Cape Coast and was pronounced dead on arrival after being rushed to a hospital. He had been battling health issues over the past year, according to his family.

The popular Kumawood actor died on May 2, 2020. The actor famously known on set as ‘Bishop Bernard Nyarko’ died while seeking medical attention at the Korle-Bu Teaching Hospital in Accra.

The Kumawood actress, who appeared recently in a COVID-19 campaign video by Kumawood stars, died on May 16, 2020. Popularly known as Nana Yaa, she died in a motor accident at Nsuatere off the Berekum-Sunyani road. Senior brother of the actress told Adom FM that the 43-year-old actress was knocked down by a Hyundai taxi while she was riding her motorbike.

Evangelist Emmanuel Kwaku Apraku, popularly known as ‘Apraku My Daughter’, died on May 20, 2020. Confirming the news, media personality Kofi Adomah said he had received a call from family members who broke the news to him. He said that he and his team were on their way to interact with the man, after numerous failed attempts to get to him, when the unfortunate news reached them. The cause of death is, however, unknown.

The radio presenter and master of ceremonies (MC) died on June 4, 2020. He died at the Nyaho Medical Centre in Accra after a short illness. His demise was confirmed by Akwesi Aboakye on Neat FM’s morning show.

The veteran actress passed away on June 10, 2020. Legally known as Beatrice Chinery, brother of the “Kejetia” star actress told Peace FM that she passed away at the Korle Bu Teaching Hospital. He said the 53-year-old actress died of complications from high blood pressure. Miliky MiCool is survived by two children.

7. Nana TuffourThe veteran highlife performer died on June 15. The “Odo Kakra, Sika Kakra” hitmaker, 66, died at home in the early hours of Monday after a short illness and his body has been deposited at the Komfo Anokye Teaching Hospital Mortuary, according to his family.