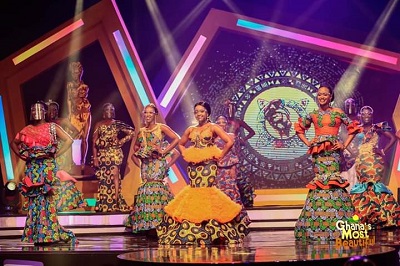 Sixteen contestants from all the regions of Ghana have been unveiled in this year’s TV3 Ghana’s Most Beautiful Reality Show which promotes the country’s culture for national unity.

By their actions, the beautiful, eloquent and talented ladies on their unveiling proved they were all set for the next three months of excitement and marketing of their cultural heritage.

They are, Abiba, representing the Savannah Region, Kafui, holding the flag for the Volta Region, Achiaa, championing the heritage of the Ashanti Region, Talata from Upper East, displaying the “Tanga Spirit”, Adjoa, going all out for the Western North, Afriyie, leading the charge for the people of Central Region in their bid to reclaim the title, Asaa from the Bono East, and Yennube, ready to wrestle the crown for the North East Region.

Bono Region is safe with Afia, as Zuzu also gears up to go the extra mile for the Northern Region, and Ayanji lacing her boots to prove her mettle for the people of Oti Region.

Efua will be poised for action for the Western Region, Naa, with ‘host and win’ in mind will stand for the Greater Accra Region, clearly the Eastern Region will be a hard nut to crack with Ofosua representing, the good story of Ahafo Region would be told by Abena, and Maali will do everything in her capacity to make the people of Upper West proud.

All of these wonderful contestants will face the tough analysis and scrutiny of Linda Ampah, Adjetey Anang, and Michelle Attoh as judges.

Four Ghanaian celebrities, Lydia Forson, Prince David Osei, Salma Mumin and Adjetey Anang earlier this year joined TV3 to scout the entire country for contestants to compete in the 2020 Ghana’s Most Beautiful. Out of which these 16 contestants got the nod.

Speaking at the official launch of the programme on Friday, the General Manager of Media General TV (TV3/Onua TV), Mr Francis Doku said the 14 years of GMB has been positioned as a platform of showcasing and educating Ghanaians on the rich Ghanaian culture and other elements shared by various societies across the country.

He added that there would be strict adherence to the COVID-19 protocols put in place by health experts.

Over the next three months, the contestants will exhibit their mind blowing performances every Sunday night between 8pm and 10pm.